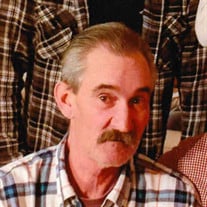 William “Billy” Morrissette, 56, of Danforth passed away on September 25, 2020 at Prairieview Lutheran Home in Danforth. He was born December 23, 1963 in Kankakee, the son of Nancy and Lloyd Anderson of Danforth. In his younger years, Bill helped on the family farm. Later he became an accomplished photographer, owning his own business in Kankakee and even being contracted to do work in Las Vegas. After that he spent a large portion of his life as a member of the local 150 operator’s union. He was married to Melody Morrissette for 11 years and they had three sons. Billy’s pride and joy in his life were his sons, Parker Morrissette, Bennett Morrissette and Cooper Morrissette of Bradley. Billy was an expert storyteller. If you were fortunate enough to hear his stories you might not believe them, I assure you, they were true. He was proficient in cursing, finding treasures in dumpsters, bumming cigarettes, and most of all laughing. He was ninety percent humor, mostly vulgar and totally inappropriate, but absolutely legendary. And that was him, love him or leave him. You had to love him, he didn’t have a mean bone in his body, but he was unapologetically himself. He was always the entertainment, always the party and we are all left with the absolute most absurd, gut busting, hilarious moments with him. He is survived by his mother, Nancy Anderson; his sister, Kimberly Miller and her husband, Ronnie Miller; his brother, Lloyd Anderson Jr. “Andy” and his wife, Jenny Anderson; and his brother, Ryan Anderson and his wife, Danielle Anderson. He was preceded in death by his father, Lloyd Anderson and his younger brother, Christopher Anderson. To Bill’s wishes, he had a private cremation service. There will be a memorial at his home in Danforth for close family and friends on Sunday, October 4, 2020 from 4-6 pm. Memorials may be made to his children. Arrangements are by the Knapp-Redenius Funeral Home in Gilman. “I am prepared to meet my maker. Whether my maker is prepared for the great ordeal of meeting me is another matter.” – Winston Churchill

William &#8220;Billy&#8221; Morrissette, 56, of Danforth passed away on September 25, 2020 at Prairieview Lutheran Home in Danforth. He was born December 23, 1963 in Kankakee, the son of Nancy and Lloyd Anderson of Danforth. In his younger... View Obituary & Service Information

The family of William Morrissette created this Life Tributes page to make it easy to share your memories.

William “Billy” Morrissette, 56, of Danforth passed away on September...

Send flowers to the Morrissette family.