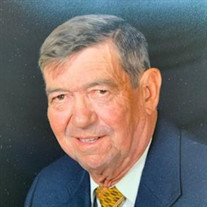 William E. “Bill” Bigler, 80, of Gilman passed away on Thursday, July 29, 2021 at his home. He was born July 17, 1941 in Carbondale, the son of George Edward and Florence Cecelia (Turlin) Bigler and they preceded him in death. He is survived by his companion of 45 years, Janice Clark of Gilman; three daughters, Donna (Robert) Gaughan of Oklahoma City, OK, Diana (John) Teel of Oklahoma City, OK, and Lori Storm (Scott Hale) of Arvada, CO; six grandchildren, Connor Gaughan, Rylee Gaughan, Brady Gaughan, Bradley Wheeler, Caleb Teel and Landon Sylvester; two great-grandchildren, Blake Wheeler and Collins Teel; and two sisters, Martha Hayes of Oak Forrest and Margaret Schmitt of Lake St. Louis, MO. Bill was a member of Immaculate Conception Catholic Church in Gilman and former member of the Sportsman Club in Bourbonnais. He was a press operator for 38 years at Armstrong and retired in 2000. Visitation will be from 10:00 am until the 11:00 Funeral Mass on Monday, August 2, 2021 at Immaculate Conception Catholic Church in Gilman. Fr. Marek Herbut will officiate. Burial will follow at St. Mary’s Catholic Cemetery in Gilman. Memorials may be made to Masses or Donor’s Choice. Arrangements are by the Knapp-Redenius Funeral Home in Gilman. Please share a memory of Bill at knappfuneralhomes.com.

The family of William E. Bigler created this Life Tributes page to make it easy to share your memories.

Send flowers to the Bigler family.