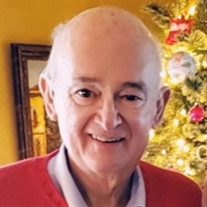 William Lee “Bill” Sanders was born May 20, 1941 in Detroit, MI, the only son of Henry Buchanan Sanders and Martha Jane (Ford) Sanders. Bill passed away peacefully at home in DeKalb, IL on October 21, 2020. He married Marilyn L. Ekhoff in Woodworth, IL on August 19, 1962. He was preceded in death by both his parents and his daughter, Jodi Lyn Trinkle on September 6, 2011. Surviving are his wife of 58 years, Marilyn; one daughter, Julie Ann Golaszewski of Cissna Park; one son-in-law, Roger Lee Trinkle of Mahomet; three grandchildren, Kyle William Trinkle of Mahomet, Derek Louis Trinkle of Antioch, TN, and Shelby Jane Garrison of Kingman, AZ. Bill “Coach” Sanders was a life-long educator. He taught elementary physical education and health at Cissna Park for 24 years. In Cissna, he was the Jr. High baseball, basketball, and track coach and district athletic director. He had great records in all three sports and was honored to be inducted into the IBCA Basketball Hall of Fame as a coach in 1989. While living in Cissna, he began the recreation commission and served on the village board. Bill was also an active member of Trinity Lutheran Church in Cissna Park. Bill was deeply involved in his state professional organization, IAHPERD, becoming the State President in 1987. The organization also awarded him a presidential citation 3 times, a service and quarter century award and in 2007, the Pop Horton Award, which is the highest honor given by the organization. Bill’s physical education program at Cissna Park became a state demonstration program during the 1980’s. In 1988, Bill and his wife moved to Canton, IL where he was an assistant principal. Three years later they moved to DeKalb, IL where Bill was a principal until 1994. After retiring as principal, he continued his career in education at Northern Illinois University as a student teacher supervisor, clinical teaching supervisor, and instructor. After 46 years, Bill retired totally from education in 2010. Bill received many awards during his long, successful career and served on several local, state, and national committees. He was very active at First Lutheran Church in DeKalb, serving on the church council and property chairman for a number of years. He also loved playing golf with his friends and family. A visitation will be held on Monday, October 26, 2020 at Anderson Funeral Home in DeKalb, IL from 3:00 – 5:00 p.m. with a private service following. Another visitation and burial will take place in Cissna Park, IL. The visitation will be held at Knapp Funeral Home, Cissna Park, IL on Tuesday, October 27, 2020 from 4:00 – 7:00 p.m. Burial will be in the Cissna Park Cemetery on Wednesday October 28, 2020 at 11:00 a.m. Memorials may be made to Unity Hospice of Western Illinois or Cissna Park Boosters.

The family of William "Bill" Sanders created this Life Tributes page to make it easy to share your memories.

Send flowers to the Sanders family.