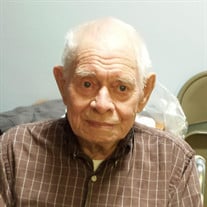 Virgil Eugene Wulffe, 93, of Clifton passed away on Monday, April 26, 2021 at Illinois Veterans Home in Manteno. He was born on May 17, 1927 in Chebanse Twp., the son of John and Mary (Kohl) Wulffe. He married Klara “Kalie” Stiglmair on January 31, 1953 in Windsor, Ontario (Canada) and she preceded him in death on July 26, 2014. He was also preceded in death by his parents; one brother; one son, James; and one grandson, Brandon. Virgil is survived by one daughter, Rev. Christine (Steve) Schoon of Somonauk; one son, William (Lynn) Wulffe of Chebanse; two granddaughters, Andrea (Jesus) Marquez of Clifton and Kendra Schoon of Frankfort; three great-grandchildren, Antonio, Selina, and Nicholas Marquez, all of Clifton; sister-in-law, Marian Wulffe of Kankakee; and several nephews and great-nephews. Mr. Wulffe was a US Army veteran and served in Korea from 1950-1953. He was a member of Clifton VFW Post #2131 and Sts. Mary and Joseph Catholic Church in Chebanse. He was also a farmer and enjoyed woodworking, gardening, fishing, and being in his woods. Memorial visitation will be held on Friday, April 30, 2021 from 9:00 a.m. until the 10:30 a.m. memorial service at Knapp Funeral Home in Clifton. Fr. Vern Arseneau will officiate. Burial will follow at St. Peter’s Catholic Cemetery in Clifton with graveside military rites by Clifton VFW Post #2131. Memorials may be made to Illinois Veterans Home in Manteno or Sts. Mary and Joseph Catholic Church in Chebanse.

The family of Virgil Eugene Wulffe created this Life Tributes page to make it easy to share your memories.

Virgil Eugene Wulffe, 93, of Clifton passed away on Monday, April...

Send flowers to the Wulffe family.