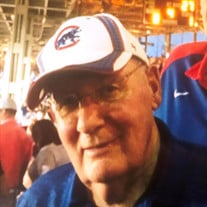 Theodore “Ted” Charles Theesfeld, 85, of Gilman passed away on Sunday, November 8, 2020 at Rush University Medical Center in Chicago. He was born September 5, 1935 in Beaverville, the son of Theodore “Tip” and Kathryn (Hilgert) Theesfeld and they preceded him in death in addition to two sisters, Norma Gersch and Beverly Eimen Tammen and one daughter-in-law, Gale Theesfeld. He married Lorraine Scharp on February 12, 1955 in Gilman and she survives. Also surviving are three sons, Kevin (Nancy Nims) Theesfeld of Aurora, Rick (Beth Zirkle) Theesfeld of Gilman and Todd Theesfeld of Chicago; one daughter, Tammy (Douglas) Gray of Herscher; seven grandchildren, Jacob (Marisol) Theesfeld, Lucas (Amy) Theesfeld, Chad Lucht, Mitch (Stacey) Theesfeld, Kelly (Kale) Kaufman, Jordan Lucht and Brooke (Jose) Robles; two great-grandchildren, Riley Theesfeld and Blake Theesfeld; one sister, Judy Jameson of Winter Haven, FL; and several nieces and nephews. Mr. Theesfeld was a member of St. John’s Lutheran Church in Danforth, the church council, and the Gilman School Board. He was the Plant Manager at GNB/Gould in Kankakee. Ted coached several of his children’s youth league games. He enjoyed watching his children’s and grandchildren’s sporting events and also enjoyed dancing, playing golf, and playing cards with his friends. Ted was an avid Chicago Cubs and Bears fan. A drive thru visitation will be from 12:00-2:00 p.m. on Thursday, November 12, 2020 at St. John’s Lutheran Church in Danforth. Private funeral services will be held on Thursday with Rev. Marburger officiating. Burial will be in the Gilman Cemetery. A Celebration of Life will be held at a later date. A live feed of Ted's funeral service will be on St. John's Lutheran Church of Danforth's Facebook Page 15 minutes before the service. Memorials may be made to St. John’s Lutheran Church in Danforth. Arrangements are by the Knapp-Redenius Funeral Home in Gilman. Please share a memory of Ted at knappfuneralhomes.com.

The family of Theodore "Ted" Theesfeld created this Life Tributes page to make it easy to share your memories.

Theodore “Ted” Charles Theesfeld, 85, of Gilman passed away on...

Send flowers to the Theesfeld family.