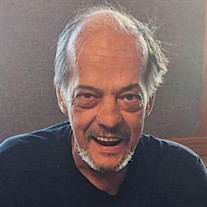 Terry Dean Dowell, age 68 of Gilman, passed away on December 22, 2020. He was proceeded in death by his parents, Edward “Ted” and Loma “Claris” Dowell and brother Tom Dowell. He is survived by his children, Tracy (Doug) Brenner (Onarga), Taylor Dowell (Gilman) and Nickolas Dowell (Watseka); sister Marcia (Eddie) Ritzma (Texas), and stepdaughter Jori (Pence) Hernandez (Oklahoma). He has 3 grandsons, Tyler and Ryan Brenner, and Braylon Dowell. Terry was born in Watseka, Il and attended school in Onarga. Terry was a local business owner and talented auto body mechanic all his adult life. He could take a salt rusted heap and turn it into a trophy, fabricating parts from sheet metal and adding his own artistic flair. He once told of an old truck he got out of a pasture that was used for a gate. He saw potential, brought it home and created another trash to treasure piece. On most days you would find him out for breakfast, his favorite meal, at K&H with his coffee and cigarettes in his pocket. He was quite the food critic and not always the most pleasant. And if you did not know him well, you might say he was a grumpy, rude guy with no filter. But those close to him, knew he also had a soft side. He loved his kids, and his little dog, Charlie. He would give what he could to someone in need. He was direct and appreciated that in others. He lived life his way. He was a fighter, and he overcame many things throughout his life. When he was not restoring old cars, he enjoyed gardening and cooking. There will be no services at this time. We encourage those who knew Terry to share some stories with his family to highlight the days when he was full of life. Memorials may be made to the family to help cover expenses. Arrangements are by the Knapp Funeral Home in Onarga. Please share a memory of Terry at knappfuneralhomes.com.

The family of Terry Dean Dowell created this Life Tributes page to make it easy to share your memories.

Terry Dean Dowell, age 68 of Gilman, passed away on December...

Send flowers to the Dowell family.