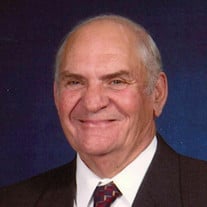 Samuel Joseph Ochs, 76, of Milford, passed away on Wednesday, May 5, 2021 at Carle Foundation Hospital in Urbana. He was born on October 3, 1944 in Olney, IL, the son of Henry and Susie (Frauli) Ochs. Samuel married Deborah Forristall in 1967, at St. John’s Catholic Church on the University of Illinois Campus. He is survived by his wife, Debbie Ochs of Milford; a daughter and son-in-law, Sarah (Jason) Bond of Marion; a brother, Kenneth Ochs of Olney, IL; and many nieces and nephews. He was preceded in death by his parents, Henry and Susie Ochs; two brothers, Sylvan Ochs and John Ochs; a sister, Esther Ochs; a sister-in-law, Marcella Ochs; and his father-in-law, Delbert Forristall. Sam graduated from East Richland High School in Olney, and furthered his education at the University of Illinois, Class of 1967, obtaining a Degree in Agricultural Education. He taught Agriculture at Watseka High School and Cissna Park High School, as well as the Iroquois County Career Center. He then transitioned to computer training for Business and Industry. For 44 years, he and Debbie served as the Secretary and Treasurer of the Iroquois County Fair. Sam was a member of St. Edmund Catholic Church, Cissna Park American Legion Post #527, Illinois Farm Bureau, a Life Member of the Illinois FFA Alumni, and was a Fourth Degree Knight with the Knights of Columbus. He enjoyed woodworking, gardening and traveling with his wife, Debbie. Sam was best known for his generosity, and loved spending time with his wife, daughter, and son-in-law. Sam was a Veteran, having served in the United States Army during the Vietnam War and provided care and comfort on medivac planes. Visitation will be from 4:00 – 7:00 p.m. on Friday, May 7, 2021 at Knapp Funeral Home in Watseka. Funeral Mass will be at 10:00 a.m. on Saturday, May 8, 2021 at St. Edmund Catholic Church in Watseka with Fr. Michael Powell officiating. Private burial will be held at Danville National Cemetery. In lieu of flowers, memorials may be given to the St. Edmund Catholic Church Memorial Garden Fund.

Samuel Joseph Ochs, 76, of Milford, passed away on Wednesday, May 5, 2021 at Carle Foundation Hospital in Urbana. He was born on October 3, 1944 in Olney, IL, the son of Henry and Susie (Frauli) Ochs. Samuel married Deborah Forristall in 1967,... View Obituary & Service Information

The family of Samuel Joseph Ochs created this Life Tributes page to make it easy to share your memories.

Samuel Joseph Ochs, 76, of Milford, passed away on Wednesday,...

Send flowers to the Ochs family.