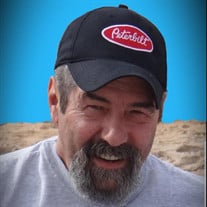 Ronald Arthur Neveu, 69, of Gilman, passed away Sunday morning, May 3, 2020, surrounded by love, at his home. He was born January 13, 1951, in Watseka, to Francis and Maxine (Powell) Neveu. Ron was raised east of Clifton on the family farm that was purchased by his Great-Great Grandfather in 1868. He graduated from Central High School in 1969. Following graduation, he farmed with his dad and started driving a semi-truck. The definition of a Legend is a notorious person, especially in a particular field. As far as we’re concerned, this was Ron. He was one of the last of the “old time truckers”. He was an amazing mechanic and spent 50 years working on his old trucks. When he retired last year (not by choice), he was still driving his 1988 Flat Top Peterbilt. Ron and Vickie hauled produce to California in the early 1970’s. They later started their business, Midwest Enterprises Refrigerated Transportation, Inc. During their career, Ron and Vickie traveled to 48 states, Canada, and Mexico together. One of the highlights of trucking for Ron, was his son Brandon joining Midwest 20 years ago. Ron helped with his children’s Youth League. He also helped Vickie with Old Boys and Girls Golf Outings. (As long as they could keep him away from the golf carts) He was one of a kind. Ron is survived by his wife, whom he described as “the love of his life”. He married Vickie Wells on February 26, 1979, in southern Illinois. He dearly loved his three children, Amy (Dave) Coggins of Clifton, Brandon (Kari) Neveu of Chebanse, and Rona (John) Smith of Gilman. He was “Papaw” to seven grandchildren that were his world, Nate (Sara) Coggins, Justin (Rachel) Coggins, Kaden Neveu, Brynna Neveu, Beau Neveu, Samantha Smith, Dalila Smith, and one great grandson, his namesake, Ron Coggins. He is survived by two sisters-in-law, Judy (Terry) McCoy of Monroe City, IN, Angela (Martin) Dreiman of Vincennes, IN, and one brother-in-law James (Kaela) Wells of Patoka, IN, and many nieces and nephews. He was preceded in death by his parents. Ron attended the Zion Lutheran Church of Ashkum. His ashes will be buried at the Clifton Cemetery. Due to COVID-19, services will be held at a later date. Memorials may be made to Shriners Hospital or Donor’s Choice. Arrangements are by Knapp-Redenius Funeral Home in Gilman. Please share a memory of Ron at knappfuneralhomes.com.

Ronald Arthur Neveu, 69, of Gilman, passed away Sunday morning, May 3, 2020, surrounded by love, at his home. He was born January 13, 1951, in Watseka, to Francis and Maxine (Powell) Neveu. Ron was raised east of Clifton on the family farm... View Obituary & Service Information

The family of Ronald Arthur Neveu created this Life Tributes page to make it easy to share your memories.

Send flowers to the Neveu family.