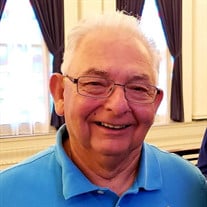 Rodlyn “Rod” D. Light, 74, of Watseka, formerly of Sheldon, passed away on January 27, 2021 at Riverside Medical Center. He was born on January 6, 1947 in Watseka, IL, the son of Harold E. and Neva Light. He married Diana L. Peters on June 20, 1970 in Watseka and she preceded him in death on June 2, 1997. He was also preceded in death by his parents. He is survived by his step-mother, Emma Jane Light of Sheldon; two brothers, Roger (Lori) Light of Sheldon, and Rick Light of Crescent City; one sister Cindy (Bob) Schneider of Sharpsburg, GA; one half-brother, Bill (Therese) Parsons and one half-sister Sandy Brown of Texas; one daughter, Alyssa Light of Missouri; two sons, Matthew (Abby) Light of Farmer City, and Benjamin Light of Watseka; four grandchildren Levi Gilbert, Austin Gilbert, Rachel Light, and Brenna Light; and several nieces and nephews. Rod graduated from Sheldon High School in 1966 and worked in retail for many years. He operated Light’s Hardware in Crescent City from 1976-1980, later working at K-mart, Easy Picken’s, and Eagle Foods in Watseka. He also worked for Chicago Steel Tape in Watseka. A devout Christian, Rod and his wife Diana were ministers at Truth Bible Church in Crescent City until her passing in 1997. Rod later returned to ministry, preaching at the United Brethren Church in Claytonville for several years. Rod enjoyed going for drives, watching westerns, enjoying the extracurricular activities of his children and grandchildren, family gatherings, homemade ice cream and funny cake, and talking about the Bible with anyone and everyone. Visitation will be on Saturday Feb 6, 2021 from 9:30am to 11:00 am at the Knapp Funeral Home in Watseka. Private funeral services will follow with Rev. Stan Jackowski officiating. Burial will be at Iroquois Memorial Park in Watseka. Memorials may be made to family wishes.

The family of Rodlyn "Rod" D. Light created this Life Tributes page to make it easy to share your memories.

Send flowers to the Light family.