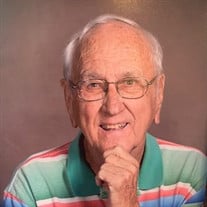 Robert D. Evans, 86, of Milford passed away on Sunday, April 3, 2022 at his home in Milford. He was born on December 10, 1935 in Milford, the son of Ira and Edith (Hislop) Evans. He married Linda Miller Hiltz in Milford on October 24, 1969 and she preceded him in passing on November 18, 1986. Surviving are one daughter, Linda (Terry) Booth of Kokomo, IN; three sons, Robert Evans Jr. of Battle Ground, IN, Randy (Donna) Hiltz of Milford, and Timothy (Gretchen) Evans of Lafayette, IN; one brother, Gerald (Judy) Evans of Milford; eight grandchildren and one great granddaughter; and two wonderful caretakers, Liz Walker of Watseka and Sierra Kunce of Martinton. Robert was preceded in death by both of his parents; wife, Linda; four brothers; and two sisters. He was a member of the Milford Methodist Church and worked for the US Postal Service for forty-two years. Robert belonged to Milford Lions Club, Milford Park Board, and Maple Grove Cemetery Board. He umpired, refereed, and worked the chains at football games. He coached for many years for several different sports and was active in the community. Visitation will be from 4:00-7:00 pm on Wednesday, April 6, 2022 at Knapp Funeral Home in Milford. Funeral services will be at 11:00 am on Thursday, April 7, 2022 at Knapp Funeral Home in Milford. Pastor Gail Meyers will officiate. Burial will be at a later date at Maple Grove Cemetery in Milford. Memorials may be given to Milford Methodist Church. Please share a memory of Robert at knappfuneralhomes.com.

The family of Robert D. Evans created this Life Tributes page to make it easy to share your memories.

Send flowers to the Evans family.