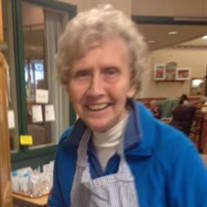 Rita Baker, 87, of Chebanse passed away on Monday, January 3, 2022 at Faith Place in Danforth. She was born September 22, 1934 in Chebanse, the daughter of Albert and Clara (Meyer) Nordmeyer. Rita married Donald Baker on June 5, 1954 in Chebanse. Don and Rita enjoyed 67 years of marriage and he survives. Also surviving are two daughters, Cathy (Michael) Schlesinger of Riverwoods and Carol (Edward) Hansen of Palatine; two sons, Mark Baker of Jacksonville, FL and Steven Baker of Chebanse; five grandchildren, Jonathan (Bridget) Schlesinger of Glenview, Lauren Schlesinger of Downers Grove, Rebecca Schlesinger of Champaign, Matthew Hansen of Chicago and Ryan Hansen of Palatine; two great-grandchildren, Henry and Adeline Schlesinger; one sister-in-law, Sandy Nordmeyer of Bourbonnais; one brother-in-law, Gerald Baker of Manteno; and many nieces and nephews. Rita had a special fondness for each of her many nieces and nephews. Most think they were her favorite. She was preceded in death by her parents and five brothers, Lester, Louis, Raynold, Wilbert and Durl; four sisters, Irene, Ruth, Irma and Delma; and one daughter-in-law, Charlotte Blackwood-Baker. Mrs. Baker was a lifetime member of Zion Lutheran Church in Chebanse, where she was very active in Ladies Aid, PTL and a member of the choir. She graduated from Central High School and was the office manager at Brandt Construction in Chebanse and Kankakee. Rita enjoyed attending church, singing, genealogy, gardening, spending time with her grandchildren, and going on walks with Don. Services will be held at a later date. In lieu of flowers, memorials may be made to Prairieview Lutheran Home-Faith Place in Danforth or Zion Lutheran Church in Chebanse. Arrangements are by the Knapp Funeral Home in Clifton. Please share a memory of Rita at knappfuneralhomes.com.

Rita Baker, 87, of Chebanse passed away on Monday, January 3, 2022 at Faith Place in Danforth. She was born September 22, 1934 in Chebanse, the daughter of Albert and Clara (Meyer) Nordmeyer. Rita married Donald Baker on June 5, 1954 in Chebanse.... View Obituary & Service Information

The family of Rita Baker created this Life Tributes page to make it easy to share your memories.

Send flowers to the Baker family.