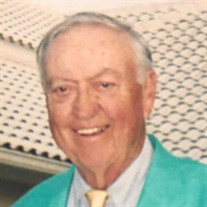 Richard Alfred “Dick” Martin, of Watseka, IL, died in Boyton Beach, Florida on March 19, 2020, of congestive heart failure. Dick was born in Watseka on July 12, 1932, to Samuel L Martin and Nadean (Meents) Martin who preceded him in death. He was also preceded in death by wife, Margaret “Maggie” Martin and grandson, Matthew Martin. He is survived by five children: Samuel L Martin II (Liz), Nancy Burns (Mark), Daniel Martin (Natalie McCann), Gregory Martin (Kelly DeWitt), and Stacey Smith, twelve grandchildren, and eleven great-grandchildren. Dick was a graduate of Watseka High School in 1950 and attended Asheville School in North Carolina. He was accepted to the University of Illinois, where he was a member of the Phi Gamma Delta Fraternity. He later enrolled at Lake Forest College. He was drafted into the US Army in 1954 and Dick returned to Lake Forest after an honorable discharge in 1956. He was a three-year letter winner in both basketball and golf, and he set a college record with 33 consecutive free throws (which he still holds) and was selected as captain of the golf team his senior year. He was also the Assistant basketball coach at Lake Forest College in 1958-1959. Dick was inducted into the Illinois High School Basketball Hall of Fame in 1979 and the Illinois Broadcaster’s Hall of Fame in 1981. He served on Board of Directors of the Western Golf Association and the Chicago District Golf Association. He was past President of Butler National Golf Course in Chicago from 1992-1993 and Chairman of the Western Open from 1976 to 1990. Dick won Golf Club Championships at Shewami, Butler National, Country Club of Florida, Bay City Country Club in Michigan, and many others. He had 17 Holes in One, had the privilege to play 2 years in the Member Guest Tournament at Augusta, and tied the Course Record on the Back 9 at Pinehurst #2. Dick was a member of the Country Club of Florida, Butler National,The Chicago Club, Shewami Country Club, Watseka Elks Club, Masonic Lodge, and the Presbyterian Church. Dick was the co-founder of WGFA, where he broadcast high school sports from 1961-1970. He was Chairman of People’s Coal and Lumber Co., owner of B&M Screw Machine Shop and past President of First Trust & Savings Bank. One of Dick’s most notable achievements was being the Voice of the Illini. From 1971 through the early 90’s, he held this achievement near and dear and was a beloved and loyal Illini fan. His play by play calls alongside Jim Grawbowski, Max Hooper, and Dan Roan were thrilling for all who listened. He was President and founder of Bromar Sports Network, which was the original Illini Network. Dick also broadcast Notre Dame Basketball for Mutual Radio from 1979-1980. Dick was an avid Warrior fan and great supporter of Watseka Athletics as well the Fighting Illini. He was also a Cardinals and White Sox fan, and he held court at various coffee clutches. Dick was a great story-teller. He had an infectious laugh and was the life of the party. He never met a stranger, he was generous, and lived his life to the fullest. He will be missed by his children, grandchildren, and friends far and wide. Memorials may be made to: The Presbyterian Church of Watseka, The Watseka Athletic Booster Club, and The University of Illinois Athletic Association, and Asheville School. Services will be held in the near future in Watseka, Illinois. Arrangements are by the Knapp Funeral Home in Watseka. Please share a memory of Dick at knappfuneralhomes.com.

The family of Richard "Dick" Martin created this Life Tributes page to make it easy to share your memories.

Send flowers to the Martin family.