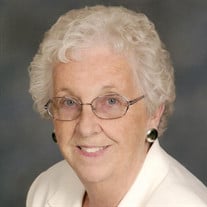 Phyllis M. Walsh, 88 of Gilman passed away on Saturday, May 9, 2020 at Merkle-Knipprath Nursing Home in Clifton. She was born on August 9, 1931 in Dawson, the daughter of Rev. Clarence and Elberta (Kettlekamp) Essmann. She married Charles E. Walsh on March 31, 1951 at the Immaculate Conception Catholic Church in Gilman and he preceded her in death on October 26, 1997. She was also preceded in death by her parents; one son, Randall Walsh; one son-in-law, David L. Ward; brother-in-law and sister-in-law, William A. and Joan Walsh; sister-in-law, Pat Walsh; and brother-in-law, Alan Meehan. She is survived by two daughters, Pat Ward of Ashkum and Roxanne (Warren) Weber of Ashkum; one son, Larry (Gayle) Walsh of Gilman; nine grandchildren, Brad (Stacey) Ward of Onarga, Kellee Ward of Ashkum, Kirk (Becca) Ward of Bourbonnais, Derek (Kia) Walsh of Lee Summit, MO, Nicki (Tyson) Edkin of St. George, KS, Matt (Jessica) Walsh of Oswego, Emily (Jason) Wagoner of Colfax, Jeremy (Erika) Weber of Ashkum, and Jamison (Emily) Weber of Ashkum; thirteen great-grandchildren; one great-great-grandchild; and one brother, Kenneth (Maxine) Essmann of Gilman. She is also survived by another sister-in-law, Marilyn Meehan of Collinsville and one brother-in-law, Donald Walsh of Salina, KS. Mrs. Walsh was a member of the Immaculate Conception Parish in Gilman and the Iroquois County Law Enforcement Association and was an Iroquois County Auxiliary Deputy. She was also a member of the Circle Eight Square Dance Club and served as an Iroquois County Election Judge for over 30 years. She was a Brownie Group Leader, a patron of the Country Theatre Workshop, and enjoyed sporting and musical events of all her grandchildren and great-grandchildren. Private graveside services will be held at St. Mary’s Catholic Cemetery in Gilman. Pastor Jim Harkins will officiate. Anyone is welcome to pay their respects by coming to St. Mary’s Catholic Cemetery in Gilman on Wednesday, May 13, 2020 from 4:00 p.m.-6:00 p.m. and greeting the family from their cars. Memorials may be made to Merkle-Knipprath Nursing Home (Chapel Sound System), the Gilman Fire Department, or Hospice of Kankakee Valley. Memorials may be mailed to Knapp-Redenius Funeral Home P.O. Box 1, Gilman, IL 60938 Arrangements by Knapp-Redenius Funeral Home in Gilman.

Phyllis M. Walsh, 88 of Gilman passed away on Saturday, May 9, 2020 at Merkle-Knipprath Nursing Home in Clifton. She was born on August 9, 1931 in Dawson, the daughter of Rev. Clarence and Elberta (Kettlekamp) Essmann. She married Charles E.... View Obituary & Service Information

The family of Phyllis M. Walsh created this Life Tributes page to make it easy to share your memories.

Send flowers to the Walsh family.