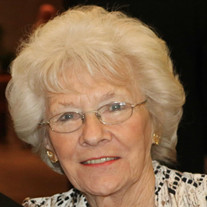 Phyllis Ann Jameson (Gibson), 89, of Milford, Illinois passed away at home on April 23, 2021. She was born on September 25, 1931, at home in Bryce, Illinois, the daughter of Annette Frerichs Breymeyer and Elmer Breymeyer, who preceded her in death. She attended local grade schools in Bryce and Woodworth and graduated from Milford High School in 1949. She began working at the local airport in Milford where she met her eventual husband, Dale W. Jameson. They were married in Chicago in January of 1952 and she worked alongside him at the Jameson Funeral Home in Milford, Illinois. She became a stay-at-home mom to her four children and later worked at the Milford Herald News and Howard Industries. In 1977, Dale passed away suddenly while out on a coroner’s call. Shortly thereafter in December 1977, Phyllis was appointed to fill the expiring term of her late husband as Coroner of Iroquois County. In 1978, she ran in her first election for Iroquois County Coroner and was one of the first female officials elected to a countywide position. She won her next four elections to the office of Coroner and never lost in any of her runs for political office. In 1980, she briefly became the first and only female Sheriff of Iroquois County, serving after the resignation of the sheriff at the time. In December of 1985, she was elected as President of the Illinois Coroner’s Association where she spearheaded the effort to make continuing education training compulsory for all coroners in Illinois. In July of 1988, the Illinois Senate appointed her to the Advisory Board on Necropsy Services which she served on until her retirement from her coroner’s role in 1996. After her run as coroner, she was elected to the Iroquois County Board which she served on for 10 years. She enjoyed serving the people of Iroquois County and always appreciated their support and confidence. In July of 1984, Phyllis married Raymond Gibson, her husband of over 36 years, who has been at her side through her final journey. He survives, along with her four children, Doug (Gloria) Jameson, Bloomington, IL, Susan (John) Odenthal, Geneva, IL, Dan (Kathleen) Jameson, Monticello, IN and Sally (John) Allhands, Watseka, IL. Also surviving are her twelve grandchildren, Annie (Steve) Cunningham, Brad (Sarah) Jameson, Christopher (Melody) Jameson all of Bloomington, IL., Dr. Jill (Mike) Scracic, Madison, WI, Amy (Alex) Pokorny, St. Charles, IL., John Odenthal, Chicago, IL., Megan (John) Delurey, Chicago, IL., Jenna (John) Holzhauser, Griffith, IN., Danny Jameson, Medford, MA., Tyler Allhands, Indianapolis, IN., Jessica Allhands, Chicago, IL., and Emily Allhands, Nashville, TN. In addition, she is survived by 15 great grandchildren and many beloved nieces and nephews. Besides her parents, she was proceeded in death by her sister, Nancy Sloan, one brother, Byron Breymeyer and two stepsons, David Jameson, and Larry Jameson. Phyllis enjoyed her politics and good game of bridge, but her biggest joys in life were her children and grandchildren and spending time with family and her Axtel Street neighbors. She was a lifelong member of St. John’s Lutheran Church at Schwer. Visitation will be held on Sunday, April 25, 2021 from 4:00pm to 7:00pm at Knapp Funeral Home in Milford, IL., and from 10:00am to 11:00am on Monday, April 26, 2021 at St. John’s Lutheran Church at Schwer. Funeral services will follow at 11:00am at St. John’s with burial to follow immediately at the church cemetery. In lieu of flowers, memorials may be made to St. John’s Lutheran Church or the Milford Fire Department. Arrangements by Knapp Funeral Home in Milford.

Phyllis Ann Jameson (Gibson), 89, of Milford, Illinois passed away at home on April 23, 2021. She was born on September 25, 1931, at home in Bryce, Illinois, the daughter of Annette Frerichs Breymeyer and Elmer Breymeyer, who preceded her in... View Obituary & Service Information

The family of Phyllis Ann Jameson created this Life Tributes page to make it easy to share your memories.

Send flowers to the Jameson family.