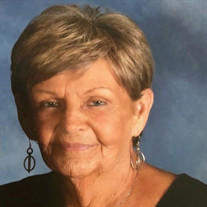 Peggy Elaine Griswold Hofbauer, 76, of Cissna Park, Illinois, passed away at home on September 15, 2020 after a lengthy and hard-fought battle with health issues. She had a passion for life; held an unwavering faith in God; and went out of her way to serve others. Peggy had a joyous spirit even when dealing with physical discomfort. She was dearly loved by her family, friends and acquaintances. Peg was born on December 21, 1943 to Juanita Ione Forest Griswold Thompson and Harold McClellon Griswold. After graduating from Watseka High School in 1962, she married Larry Ray Hofbauer at the First United Methodist Church in Watseka, Illinois on August 5, 1962. They moved to Franklin, Indiana, where she began her first job working for Lehnkamp Realty & Insurance. Peg and Larry then created a life in Cissna Park, Illinois where Peg worked at Jim’s Café, and then for many years at Lober’s Café. She also worked for The ARC of Iroquois County, and was a volunteer for Hospice of Iroquois County. The Chicago Cubs were a very enjoyable part of her life, and she shared that enthusiasm with her beloved brother, husband and family. She was also an avid golfer and was a member of Lakeview Country Club. She is survived by her husband, Larry Hofbauer of Cissna Park; her son, Jeff (Debbie) Hofbauer of Murfreesboro, Tennessee; and her son, Todd (Michelle) Hofbauer of Western Springs, Illinois. She is survived by three treasured grandchildren; Brent (Cecilia) Hofbauer of Little Rock, Arkansas; Zach Hofbauer of Murfreesboro, Tennessee; Jade Hofbauer of Bronx, New York; and two great granddogs; Miley and Javier. She is survived by her sister, Judy (Bill) Putnam. Peg was predeceased by her daughter, Lisa Elaine Hofbauer and son, Brent Douglas Hofbauer; her parents, Juanita Griswold Thompson and Harold McClellon Griswold and her brother, Gary Griswold. Peggy will be missed more than words can say. Knapp Funeral Home in Cissna Park is in charge of the arrangements. Please share a memory of Peg at www.knappfuneralhomes.com. A celebration of Peggy's life will be held on Saturday, August 7, 2021 at the Cissna Park United Methodist Church at 10:30 am with Pastor Ashley Clifton officiating. Visitation will be one hour prior to the service. In lieu of flowers, memorials may be made to Cissna Park United Methodist Church or Iroquois Memorial Hospice.

Peggy Elaine Griswold Hofbauer, 76, of Cissna Park, Illinois, passed away at home on September 15, 2020 after a lengthy and hard-fought battle with health issues. She had a passion for life; held an unwavering faith in God; and went out of her... View Obituary & Service Information

The family of Peggy E. Hofbauer created this Life Tributes page to make it easy to share your memories.

Send flowers to the Hofbauer family.