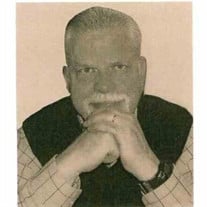 Paul A. Yohnka, 76, of Kankakee, died after a short illness on Monday October 26, 2020 at Riverside Medical Center. Visitation will be from 6-8 PM on Friday, October 30, at Knapp Funeral Home in Clifton. Services are on Saturday for family only. Per CDC guidelines, masks and social distancing will be required. In lieu of flowers, memorials may be made to Kankakee School District Fine Arts. Paul was born March 5, 1944, in Chebanse, the first child of William A. and Rell Berns Yohnka. He then became the cool older brother of four siblings. He graduated from Central High School in 1962 and completed his Master of Fine Arts at Northern Illinois University in 1968. He taught art at Sheldon High School for 3 years, then decided to move west, where he continued teaching art in the Clark County School system in Las Vegas for 30 years In addition to teaching art, he wrote verses for Hallmark and American Greetings cards, coached basketball, and was a freelance artist. He famously won a 1979 Corvette for his entry in a Planters’ Nuts ad contest. In 2006, he and his wife Linda (Giertz) moved back to Illinois, where he became part of the Kankakee arts scene and a frequent spectator at the Kankakee Speedway. Throughout his life, Paul had a talent for storytelling and he was never happier than when he was making people laugh. Right now, he would probably like for us to make some joke about who still owes him money. He is survived by his wife, Linda, of Kankakee; his daughter and son-in-law, Sara and Mitch Bradshaw of Crossville, TN, his daughter and son-in-law Amy and Shawn Moore of Pahrump, NV; their children Alex Moore and Riley (Cody) Jennings, and his son Jesse Yohnka and Jesse’s fiance Shelley, of South Lake Tahoe, CA, and their children, Ryin, Jasper, Catherine, Madeline, and Nolan. He is also survived by his Aunt Donna (Yohnka) Saathoff and his Uncle Norman (Nancy) Yohnka; his sister Susanne Hildebrand of Jackson, MO and her children, Brooke (Bobby) Clubbs and Krista (Chad) Davidson; sister and brother-in-law Delores “Dodie” and Sam Ashmore, of Springfield and their daughters, Emily Moorman, Beth Ashmore, Kate (Donald) Watson, and Lori (Chance) Ruppel; his sister-in-law, Terry Yohnka of Kankakee, Bill and Jen Yohnka, Bob Yohnka and Dr. Michelle Keeling, Betsy (Chris) Benoit, Becca (Chad) Patton, and sister and brother-in-law Teresa and Thomas Anderson of Chicago and her daughter Frances. He is also survived by his first wife Susan (Smits) Knorr, 26 great-nephews and great-nieces, as well as all the honorary niblings who called him “Uncle Paul.” He is preceded in death by his parents William and Rell Yohnka, his brother-in-law James Hildebrand, and his favorite brother and best friend, Dennis Yohnka. Please share a memory of Paul at knappfuneralhomes.com.

Paul A. Yohnka, 76, of Kankakee, died after a short illness on Monday October 26, 2020 at Riverside Medical Center. Visitation will be from 6-8 PM on Friday, October 30, at Knapp Funeral Home in Clifton. Services are on Saturday for family... View Obituary & Service Information

The family of Paul A. Yohnka created this Life Tributes page to make it easy to share your memories.

Send flowers to the Yohnka family.