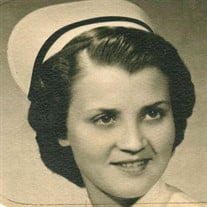 Patricia Gail Colravy Mogged, a life-long resident of Piper City, IL, died November 23, 2020 while under OSF Hospice Care at Piper City Rehab and Living Center. Pat was born in 1934 to Edmund and Elma (Herr) Colravy of Piper City, Illinois. She graduated from Piper City High School in 1952, and from St. Joseph’s Hospital School of Nursing in Bloomington in 1955, at which time she accepted her 1st nursing position at Fairbury Hospital. She later worked at Fairview Haven in Fairbury, IL. Pat told stories of caring for patients on iron lungs. One of her fondest memories of nursing school was attending a lecture in St. Louis by Dr. Jonas Salk, who had discovered the polio vaccine. Ironically, now, her passing was hastened by another deadly pandemic. Nursing was her calling, and at age 78, her kids had to coax her to retire. She wasn’t ready to slow down yet. Pat married the love of her life, Bob (Robert) Mogged in 1956. Over the next 46 years they raised six children, operated Robert Mogged Construction, and were very active members in the Ford County Democratic Party. Bob preceded her in death in 2002. Pat was a devout member of St. Peter’s Catholic Church, CCD coordinator, CCW member, Joliet Diocese CCW Woman of the Year, Cub Scout leader, provided piano accompaniment to many students at music contests, served on the Ford Central School Board, always had a word of encouragement or quip to quote, worked tirelessly, and prayed constantly. She enjoyed gardening, cooking for her family, and crocheting, and always said that “anything worth having is worth working for.” She could always be found at her grandkids athletic and musical events and was an avid fan of the Cubs and Bears. Pat was also preceded in death by her parents, her dear brother James Colravy, and her beloved son Michael Mogged. She will be greatly missed by and is survived by her daughters Shellan (Rick) Schwank of Godfrey, Maureen (Dave) Wyhs of Bloomington, sons Scott (Kim) Mogged, Timothy Mogged, and Paul (Sharon) Mogged- all of Piper City, daughter-in-law Tina Mogged of Bloomington, 19 grandchildren, 16, great-grandchildren, and her brothers and sisters-in-law, Marjorie Colravy of St. Petersburg FL, Glenn Mogged of Piper City, Marian Mogged of Martinton, Harry (Virginia) Mogged of LaHogue, and Charles (Verna) Mogged of New Mexico. Due to Covid-19, a private Mass of Christian Burial will be celebrated on Saturday, November 28th, 2020 at St. Peter’s Catholic Church in Piper City by the Rev. John Balluff. Burial will follow at Calvary Cemetery in Piper City. A public memorial service will be held at a later date. Memorials may be made to St. Peter’s Catholic Church in Piper City or Piper City Rehab and Living Center. Arrangements by Knapp-Redenius Funeral Home in Gilman.

The family of Patricia Gail Mogged created this Life Tributes page to make it easy to share your memories.

Send flowers to the Mogged family.