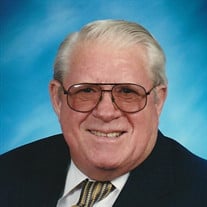 Norman E. Steiner, 88, of Mesa, AZ (formerly of Buckley, IL and Watseka, IL) passed away Thursday, October 15, 2020 in Chandler, AZ. He was born June 30, 1932 in Artesia Township, IL, the son of Chris and Erna (Schumacher) Steiner. He grew up in a farming family which fostered his work ethic and lifelong interest in all topics related to agriculture. On July 8, 1953 Norman married Rosalie Henke in Milford. She preceded him in death in 1996. He married Joy Bergman Moad on October 23, 1999 in Gilbert, AZ. She preceded him in death in 2011. Norman served as a tank mechanic in the U.S. Army from 1952 to 1954, was a heavy equipment operator for Artesia Township for over 10 years before and after serving in the military, and was employed as a pressman at UARCO in Watseka for more than 30 years until his retirement. Norman never met a stranger. He was very family-oriented and always went out of his way to help others. He was a lifetime member and served as Commander of the American Legion Post #23 in Watseka; was a former member of Calvary Lutheran Church in Watseka, serving as usher; and was a member and served as elder and usher at Pilgrim Lutheran Church in Mesa, AZ. He also volunteered as a leader when his sons were in the Boy Scouts. He loved to cook and grill, and enjoyed raising many kinds of organic vegetables in his garden long before organic gardening became common. He traveled extensively in the U.S. and throughout the world. He enjoyed spending time with his grandchildren when they visited, taking them on special excursions to see the local sights and especially to the Variety and News Store in Watseka to select a few of their favorite candies from the candy case. Surviving are his daughter, Cheryl Boyer of Gilbert, AZ; sons Dr. Dale (Tracy) of Chandler, AZ, Chris (Cindy) of Morris, IL; stepdaughter, Susan (Kyle) Lucas of Dallas, TX; stepson, Dr. John (Lisa) Moad of Dayton, OH; brother, Delbert (Carmeen) Steiner of Clifton; sisters, Elaine Reiners of Milford, Ruth Ann (Keith) Hartke of Buckley; sister-in-law Donna Steiner of Buckley; grandchildren Chad and Cory Boyer, Cara (Justin) Kiggins, Christa (Zack) Lindsay, Curt (Pam) Steiner, and Carley Steiner; great grandchildren, Seren and Jensen Kiggins, Clayton, Rhett, and Drake Steiner; and many nieces, nephews, step-grandchildren, step-great grandchildren and their families. He was preceded in death by his parents, wives, one brother, Paul, 2 brothers-in-law, 2 sisters-in-law, and one niece. Due to current health concerns, a memorial service will be held in Illinois at a later date. Arrangements by Knapp Funeral Home in Watseka. In lieu of other expressions of sympathy, memorial contributions may be made to Hospice of the Valley, 1510 E. Flower St., Phoenix, AZ 85014; Calvary Lutheran Church, Watseka, IL; Pilgrim Lutheran Church, 3257 E. University Drive, Mesa, AZ 85213; or Epiphany Lutheran Church, 800 W. Ray Rd, Chandler, AZ 85225 .

The family of Norman E. Steiner created this Life Tributes page to make it easy to share your memories.

Send flowers to the Steiner family.