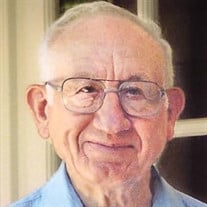 Norman Henry Schmidt passed away on Wednesday, July 1, 2020 after reaching the age of 96 years old. Norman was born on November 22, 1923 in Seward, NE to Emma and Cajus Schmidt. As a boy, he worked on the family farm with his younger brother, Herman. Together they rode their ponies, Ginger and Dandy, to help herd the cows and to work other chores. As a young man, Norman completed his studies at Concordia College and became a teacher in Cleveland Ohio. Eventually he moved to Woodworth Illinois to continue his lifelong passion of teaching at St. Paul’s Lutheran School. His students fondly remember the checker tournaments in his classroom and how the “student champion” got to challenge “the teacher, Mr. Schmidt” to one final round of checkers. It was rumored that Mr. Schmidt was unbeatable! (Even in Norman’s final years at the two Assisted Living Facilities, no one could win a checker game against him.) Early in his teaching career, Norman and his first wife, Doris, had 5 children, Theodore, Robert, Carol Ann, David and Janet. All of his kids had the pleasure of being a student at St Paul’s and being baptized and/or confirmed in the Church building across the road. In later life, Norman worked at the T&D Metal Products in Watseka Illinois where he met and married his second wife, Maxine Vandenberg Schmidt in 1974. He then became stepfather to Greg and Pam. Norman remained in faithful service to his church and school in Woodworth. Besides helping out with Sunday School, Church Picnics, the local Iroquois County Fair Church booth, he even worked during the school’s remodeling project by chipping mortar off old bricks for re-use. After almost 4 decades of marriage, Maxine passed away and then Norman moved to North Carolina and lived out his final few years in the loving care of his daughters, Carol and Janet. He also leaves behind 8 grandchildren (Donald Jr, David, Alexander, Clayton, Nathan, Trevor, Kyle and Nick) and 4 great grandchildren (December, Daelyn, Emma and Brooklyn). Norman will be buried next to his wife Maxine at St. Paul’s cemetery in Woodworth. Due to the complications of Covid 19, the family will schedule a Memorial Service at a later date. In lieu of flowers, a donation made in Norman’s memory to St Paul’s Lutheran School would be appreciated by the family. St Paul’s Lutheran School, 108 West Woodworth Rd, Milford, IL 60953. Arrangements by Knapp Funeral Home in Watseka. Please share a memory of Norman at www.knappfuneralhomes.com

Norman Henry Schmidt passed away on Wednesday, July 1, 2020 after reaching the age of 96 years old. Norman was born on November 22, 1923 in Seward, NE to Emma and Cajus Schmidt. As a boy, he worked on the family farm with his younger brother,... View Obituary & Service Information

The family of Norman H. Schmidt created this Life Tributes page to make it easy to share your memories.

Norman Henry Schmidt passed away on Wednesday, July 1, 2020 after...

Send flowers to the Schmidt family.