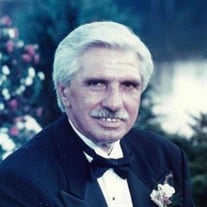 Norman Lee Brosseau, 83 of Onarga, IL passed away at his home on Tuesday December 7, 2021, surrounded by family. Norman was born August 5, 1938, on a farm in Bourbonnais, Illinois the son of Everett and Dorothy (Bigger). Norman married Donna Marnell on February 10, 1962, at Saint Patrick’s Church in Kankakee, Illinois. He founded Bennett & Brosseau Roofing in 1971, now celebrating its 50th year as a third- generation family business. Norman was also a dedicated member of the Kankakee Roofers Contractor Association, the Chicago, Midwest, and National Roofing Contractor associations. He was also member of the One Hundred Club of Kankakee and Ducks Unlimited. He moved to Onarga in 1972 with his loving wife of 60 years, Donna Marnell Brosseau and their three children James (Christy)Brosseau of Lemont, Lisa (Mark) Zirkle of Gilman, & Susan Brosseau Lee of Bloomington. He was proud of his family and the home he created. He enjoyed spending time with his family, including his eight grandchildren. Jonathan Boma, Shelbi Brosseau, Dustin Boma, Taylor (Connor Cavins) Boma, Zachary (Lanie Coules) Brosseau, Nicole Lee, Jordan Lee, Riley Brosseau and one great-grand daughter Noa Grey Cavins. He was very happy Noa made her arrival in time for him to hold her. Norman had 3 siblings. Betty Windal, Donald (Pat)Brosseau and Kenneth Brosseau, along with many nieces and nephews. He was preceded in death by his father Everett, mother Dorothy, his grandson Dustin Boma, and his brother Donald Brosseau. He was an avid sports fan, gardener, and outdoorsman. He loved tailgating at Bears and Illini games with his family and friends. Every day he spent time watching the eagles soar over his pond. He was also a big supporter in his grandchildren’s sports and accomplishments as well. Norman will be greatly missed by his family and friends, and everyone that had the honor and privilege of knowing him. Memorials may be made to Iroquois Memorial Hospice. https://www.iroquoismemorial.com/getpage.php?name=Hospice_Services The Knapp Funeral Home in Onarga is handling arrangements for the family. Visitation will be Friday December 10th, 3-6 at Life Church 1411 S. Crescent Street, Gilman, IL 60939. Funeral will be Saturday December 11th, 2021, with visitation from 10-11. Funeral proceedings will start at 11. Rev. James Harkins will officiate. Burial will follow at Onarga Cemetery in Onarga with lunch to follow at Life Church 1411 S Crescent Street, Gilman, IL 60939. Please share a memory of Norman at knappfuneralhomes.com.

Norman Lee Brosseau, 83 of Onarga, IL passed away at his home on Tuesday December 7, 2021, surrounded by family. Norman was born August 5, 1938, on a farm in Bourbonnais, Illinois the son of Everett and Dorothy (Bigger). Norman married Donna... View Obituary & Service Information

The family of Norman L. Brosseau created this Life Tributes page to make it easy to share your memories.

Norman Lee Brosseau, 83 of Onarga, IL passed away at his home...

Send flowers to the Brosseau family.