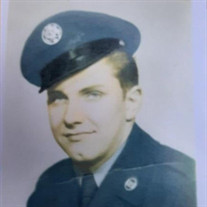 Merritt D. Hansen, 89, of Chebanse passed away on Wednesday, February 16, 2022 at Amita Health St. Mary’s Hospital in Kankakee. He was born March 4, 1932 in Chebanse, the son of Oscar F. and June O. (Brenneisen) Hansen and they preceded him in death. He married Sally J. Jardis on March 4, 1962 in San Diego, CA and she preceded him in death on June 18, 2009. He is also preceded in death by one daughter, Meredith; two brothers, Dick and Harry; two sisters, Sandy and Darlene; two sisters-in-law, Gwen and Verna; and two brothers-in-law, John Cox and William Beck. He is survived by one step-daughter, Laurie (Shane) Sheets of Michigan; his special friend, Maude Thompson of Chebanse; five sisters, Marilyn Yohnka of Chebanse, Carolyn Cox of Chebanse, Bobby (John) Gray of Ashkum, Susan (David) Larsen of Chebanse and Peggy (Bill) Mattox of Clifton; one brother, Jack (Martha) Hansen of Chebanse; and numerous nieces and nephews. Merritt served in the U.S. Air Force during the Korean Conflict in the 758th AC&W Radar. He was a former mayor of Chebanse and worked at Hansen’s Window Coverings for 19 years. He was a member of the Chebanse American Legion and enjoyed playing cards. Visitation will be from 12:00 pm until 2:00 pm on Saturday, February 26, 2022 at the Knapp Funeral Home in Clifton. A graveside service will follow at 2:30 pm at the Evergreen Cemetery in Chebanse with Rev. Marsha Collins officiating. Graveside military rites will be by the Chebanse American Legion. Memorials may be made to the Otto Twp. Fire Department. Please share a memory of Merritt at knappfuneralhomes.com.

Merritt D. Hansen, 89, of Chebanse passed away on Wednesday, February 16, 2022 at Amita Health St. Mary&#8217;s Hospital in Kankakee. He was born March 4, 1932 in Chebanse, the son of Oscar F. and June O. (Brenneisen) Hansen and they preceded... View Obituary & Service Information

The family of Merritt D. Hansen created this Life Tributes page to make it easy to share your memories.

Merritt D. Hansen, 89, of Chebanse passed away on Wednesday,...

Send flowers to the Hansen family.