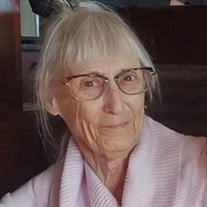 Maureen Shannon of Danforth, IL, passed at home surrounded by her family on Friday, November 20, 2020 at the age of 77. She was born January 6th, 1943 to Harry and Maxine Shannon of Gilman IL. She was the eldest of four sisters, leaving behind Judy (Bob) Pree, Michael Sue (Jim) Nims, Katie (Jim) Regnier In 1963, Maureen married Samuel G Townsend and had three children; Sheila (Kevin) Bernard of Clifton IL, Shawna (Bart) Johnson of Danforth IL, and Sam Shannon (Monique) Townsend of Mesa, AZ. She also adored 8 grand and 11 great grandchildren. Maureen graduated in 1961 from Gilman High School. She then attended Eastern Illinois Univ, and Illinois State Universities to achieve her PhD in English studies. She taught English, Literature, creative writing, and poetry at Kankakee Community College. During Dr. Shannon's time at KCC, she founded and directed the “Prairie Fire”, a yearly publication that showcased students' creative works including stories, poems and artwork. She retired in 2003 after 33 years of dedication to her students. She loved teaching so much she taught community classes for writing even into her retirement and continued to take various classes herself in a variety of subjects from gardening to art. Maureen authored and published numerous short stories during her lifetime. She owned a large library in a great variety of genres. She always welcomed others to share her books. She had a passion, and a green thumb for gardening and spent much of her life planting a very diverse range of flowers, trees and shrubs. She was proud of her certified “Master Gardner” status among the community. Maureen's other lifelong love were her Yorkies and was rarely ever seen without a few nearby. Most of her dogs were certified service dogs. Both dogs and Maureen enjoyed their job of visiting hospitals, nursing homes and schools to bring comfort to all. Another constant joy in her life was playing cards. She was a skilled Bridge and Pinochle player. She belonged to several Bridge groups and played several times a week. For her birthday each year she hosted a Pinochle Party to fill her home with laughter and food for the card games. Throughout her life, she nourished countless friendships but the bond among her sisters was by far the deepest. They maintained a weekly “Sisters Lunch” without fail, and could always count on each other’s company to enjoy the Bears and Bulls games, often sporting their favorite jerseys and coordinating jewelry. She delighted in the Theatre and was a season ticket holder for many years, always accompanied by her sisters, daughters, granddaughter, nieces and friends. She would often host “Camp Grandma” where she invited her grandchildren and their friends to stay at her house for as many days as they liked. She was known as “Gma” to many kids and loved a house full of laughter! Maureen was very involved with the lives of her grandchildren and great-grandchildren. She leaves behind Nick and Heather Bernard, with Connor, Emilee, Sophie; Nolan and Heidi Bernard, with Camden, Cecily; Nathan and Stephanie Bernard, with Owen, Juniper, George; Neil and Kristina Bernard, with Chloe; Haley Schneider, with Illyria, Solara, Oliver Schneider (Jacalyn Wingerter), as well as many neices and nephews. Attending as many of their events as possible in her nearly 40 years of being a grandmother/great-grandmother was such a joy to her. Maureen was preceded in death her parents and two grandsons, Trevor Schneider, and Alexander Schneider. We were so very blessed, and proud to call her “ours” as she will leave a painful void in our lives. Maureen was a master wordsmith but words are so inadequate to describe how much she meant to so many people. She spent her life sharing her joy and love with many people in innumerable ways. Cremation rites have been accorded by Knapp Funeral Home in Clifton. Private family services will be held at a later date. In lieu of flowers, memorials may be made to the Family’s Wishes in which they will divide the funds between Maureen’s love of dogs, gardening, and literature. Please share a memory of Maureen at knappfuneralhomes.com.

Maureen Shannon of Danforth, IL, passed at home surrounded by her family on Friday, November 20, 2020 at the age of 77. She was born January 6th, 1943 to Harry and Maxine Shannon of Gilman IL. She was the eldest of four sisters, leaving behind... View Obituary & Service Information

The family of Maureen Shannon created this Life Tributes page to make it easy to share your memories.

Maureen Shannon of Danforth, IL, passed at home surrounded by...

Send flowers to the Shannon family.