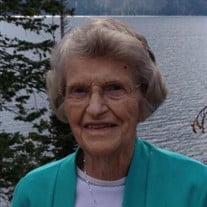 Mary Jane Zumwalt, 92 of Sheldon passed away on Wednesday, November 11, 2020 at Sheldon Healthcare. She was born on December 14, 1927 in Lawrenceville, the daughter of Russell and Bernice (Hunt) Roberts. She married the love of her life, William Zumwalt on June 19, 1948 in Watseka, and he preceded her in death on December 24, 1993. She was also preceded in death by her parents; one brother, Robert Roberts; and one sister, Ethel Mae Flanders. Mary Jane is survived by her first son, Dr. Philip (Anne) Zumwalt of Watseka and their first daughter, Jill (Josh) Rodin and their children, Sean, Cassie, and Tony of Vernon Hills, their second daughter, Gwen (Dr. Eric) Szczesniak and their daughter, Lucy of Valparaiso, IN, and their son, Mark Zumwalt of Watseka; her daughter, Cynthia (Ronald Kanwischer) Zumwalt of Springfield, their daughter, Katelyn Kanwischer of Chicago and their son, Benjamin (Alexandra DeLarco) Kanwischer and their son, Jack of Elmhurst; and her second son, James Russell “J.R.” (Dr. Sharon Welbel) Zumwalt of Skokie and their children, Maia, Remi, and Gavi Welbel. She is also survived by one brother, John (Jan) Roberts of Flagstaff, AZ. Mrs. Zumwalt worked at the Sheldon Grade School and taught third grade from 1964 to 1990; she loved working with children and watching them grow. She always enjoyed being with her grandchildren and great-grandchildren and they continue to talk about all of the great times they have had with their Grandma. Mary Jane was also a lifelong Cubs and Bulls fan and volunteered at Iroquois Memorial Hospital Auxiliary, mostly at the gift shop, for several years. She enjoyed a lot of traveling and went on several ocean cruises with family. Private graveside services will be held at Sheldon Cemetery. Rev. Neil Larimore will officiate. Memorials may be made to Iroquois Memorial Hospital Auxiliary, Iroquois Memorial Hospice, Sheldon United Methodist Church, or the Sheldon Library. Arrangements by Knapp Funeral Home in Watseka.

Mary Jane Zumwalt, 92 of Sheldon passed away on Wednesday, November 11, 2020 at Sheldon Healthcare. She was born on December 14, 1927 in Lawrenceville, the daughter of Russell and Bernice (Hunt) Roberts. She married the love of her life, William... View Obituary & Service Information

The family of Mary Jane Zumwalt created this Life Tributes page to make it easy to share your memories.

Mary Jane Zumwalt, 92 of Sheldon passed away on Wednesday, November...

Send flowers to the Zumwalt family.