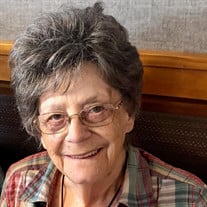 Mary Lee Donley, 82, of Cissna Park passed away on Friday, February 19, 2021 at Arcadia Care in Clifton. Mary Lee was born on June 23, 1938 in Homer, IL, the daughter of Walter and Vera (Summers) Messman. She married Earl F. Donley on January 26, 1958 in Broadlands, IL and he preceded her in death on March 9, 2018. She was also preceded in death by her parents and two sons, Mark and David. She is survived by three grandchildren, Dylan (Jesi) Donley of DeKalb, Michael Donley of Chicago, and Carly Donley of Bradley; one great-grandchild, Harper Donley of DeKalb; two daughters-in-law, Elizabeth Donley of Hoopeston and Nancy Donley Skelly of DeKalb; two brothers, Paul (Susan) Messman of Homer and Jerry (Connie) Messman of Homer; one sister, Barb (George) Gerdes of Broadlands; two brothers-in-law, Bob (Kay) Donley of Danville and Gene Donley of Westville; and one sister-in-law, Betty (Earl) Plotner of Platte City, MO. She was valedictorian of her high school senior class. Mary Lee pursued an education as a medical transcriptionist at Southern Illinois University. She was a homemaker and helped her husband Earl with Donley Trucking bookkeeping. Mary Lee was a member of St. John’s Lutheran Church at Ash Grove where she served as a Sunday School Teacher. Mary Lee enjoyed reading, shopping, cooking, solving crossword puzzles, and spending time with her grandchildren. Visitation will be from 11:00 a.m. until the 1:00 p.m. funeral service on Thursday, February 25, 2021 at Knapp Funeral Home in Cissna Park. Deacon Pat Skelly will officiate. Burial will follow at Floral Hill Cemetery in Hoopeston. Memorials may be made to the Great-Grandchildren Education Fund.

The family of Mary Lee Donley created this Life Tributes page to make it easy to share your memories.

Send flowers to the Donley family.