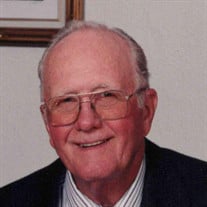 Marvin Lee Stiegman, 97, of Thawville passed away peacefully on Thursday March 24, 2022, at the Piper City Rehabilitation and Living Center. He was born on January 10, 1925 in Thawville, a son of Andrew and Anna (Liebengood) Stiegman. He was preceded in death by his brother, Orval Stiegman and his wife Beverly. Marvin married Mary Beverly Van Steenberge in Thawville on June 12, 1948. He is survived by their two sons, Eric Stiegman of Thawville and Dr. Gregory Stiegmann of Denver, Colorado, daughter-in-law Dr. Sarah J. Chilton, and grandchildren, Colonel (Dr.) Regan A. Stiegmann-Stafford of Castle Rock, CO and Andrew A.V. Stiegmann of Anchorage, Alaska. Marvin was an active sportsman during his earlier years. He was proud of his accomplishments as a baseball pitcher for the Buckley Dutchmasters and was offered a spot in the NY Yankee Farm system; however, World War II derailed that opportunity. He was an amateur fur trapper, an avid fisherman, and a hunter who eventually shifted from traditional firearm to bow hunting as his method of choice. He was a member of a men’s bowling league, a men’s poker group, and with his wife Beverly, was an active member of a local Bridge club. Marvin and Beverly were members of St. Peter’s Lutheran Church in Thawville. Marvin’s life work was farming. He was a longstanding member of the Illinois Farm Bureau and recognized early on that farms needed to grow in scale and that farmers needed to become more efficient and productive. To those ends, in the late 1950’s, he designed and built equipment in his shop that allowed him to double his productivity with a number of field operations. In parallel, he increased his land holdings as opportunities arose. In his spare time, when broadcast television was sweeping the country, he designed, built and sold a number of tall towers for rural television antennas. Two of these towers, now over 60 years old, stand proudly beside homes that his two son’s occupy today. Private funeral services will be held on Friday April 1, 2022 at the Knapp Funeral Home in Onarga. Pastor Brian King will officiate. Burial will follow in the Ridgeland Township Cemetery in Thawville. Memorials may be made to either the Buckley Dutchmasters: Coach, Trent Eshleman, e mail-- [email protected], or St. Peter’s Lutheran Church in Thawville. Please share a memory of Marvin at www.knappfuneralhomes.com.

Marvin Lee Stiegman, 97, of Thawville passed away peacefully on Thursday March 24, 2022, at the Piper City Rehabilitation and Living Center. He was born on January 10, 1925 in Thawville, a son of Andrew and Anna (Liebengood) Stiegman. He was... View Obituary & Service Information

The family of Marvin Lee Stiegman created this Life Tributes page to make it easy to share your memories.

Send flowers to the Stiegman family.