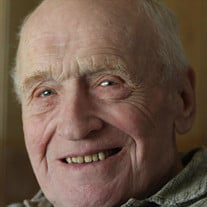 Marion Omer Lindquist, 94, formerly of Chatsworth, died on Thursday, Dec. 24, 2020, at Prairieview Lutheran Home in Danforth. He was born on Aug. 14, 1926, in Piper City, the son of Omer J. and Velma (Meisenhelder) Lindquist. He married Mary Ann Poplett on Jan. 26, 1958, in Dahinda, Illinois, and she preceded him in death on Feb. 16, 2012. He also was preceded in death by his parents; one son, Stephen Douglas Lindquist; one sister, Bernice; two brothers, Russel Lindquist and Francis Lindquist; and their respective wives, Marie and Lois. Marion is survived by two sons, Dale Lindquist of Des Moines, Iowa, and David (Dawn) Lindquist of Indianapolis; five grandchildren, Eric Lindquist of Phoenix, Valerie (Patrick) Lunasol of Phoenix, Anthony Mentz of Chicago, Michael Mentz of Flint, Michigan, and Ian Lindquist of Indianapolis; and two great-grandchildren, Felix Lunasol and Phoebe Lunasol of Phoenix. Among many additional treasured loved ones, he is survived by nieces Patty (Irvin) Wilken of Chatsworth and Joyce (John) Pool of Thawville. He graduated from Chatsworth High School in 1944, and he served in the U.S. Army following World War II. Marion farmed east of Chatsworth, and he retired from Nichols-Homeshield in the early 1990s. Marion enjoyed restoring his tractors and playing Hawaiian steel guitar and resonator Dobro guitar in “jam” groups throughout Central Illinois as well as in Texas during past winters. He was a member of Community of Christ Church in Bloomington. A celebration of life will be on Saturday, June 12, 2021 at Knapp-Redenius Funeral Home in Gilman. The memorial visitation will be from 11:30 a.m. – 1:00 p.m. with the memorial service at 1:00 p.m. Burial will follow at Chatsworth Twp. Cemetery. It was Marion’s wish that any memorial tributes be made in the form of donations to the Community of Christ World Hunger Fund, Outreach International or Habitat for Humanity.

Marion Omer Lindquist, 94, formerly of Chatsworth, died on Thursday, Dec. 24, 2020, at Prairieview Lutheran Home in Danforth. He was born on Aug. 14, 1926, in Piper City, the son of Omer J. and Velma (Meisenhelder) Lindquist. He married Mary... View Obituary & Service Information

The family of Marion Omer Lindquist created this Life Tributes page to make it easy to share your memories.

Send flowers to the Lindquist family.