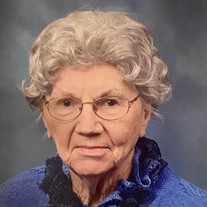 Lucille Margaret Hustedt Vogel, 93, of Cissna Park, IL passed away on Wednesday, March 25, 2020 at her home. She was born in 1926 on May 14, her father's birthday. Lucille, the daughter of John C. and Meta Willms Hustedt, was born at their rural home in Crescent City, Iroquois County, Illinois. She spent her childhood on a farm across from Hitchcock School. Her four brothers, Bill, Edgar, Paul and Harry preceded her in death. Lucille was the last aunt of her generation on both the Hustedt and Vogel sides. She graduated from Crescent-Iroquois Community High School as Salutatorian of a class of nine on May 16, 1944. She was secretary to the Iroquois County Superintendent of School's Office in Watseka for nearly five years before marrying Arthur Albert Vogel of Cissna Park. They married on Armistice Day, November 11, 1948 at St. Peter's Lutheran Church, Crescent City. Art was a WWII Veteran and Veteran's Day was very important to them. He preceded her in death on August 11, 1995. Lucille loved her role as mother to Nancy (Richard) Mueller of Sun City AZ, Dale (Malita LaFrance) of Hoopeston IL, Ronald of Meridian ID, Joe (Barbara) of Princeton TX, and Marvin (Suzanne) of Cissna Park. She was a proud grandmother of Scotland (Megan Mohr), Christina (Erik Gravelle), Kyle (Kristen), Kolin (Jenna), Abby (Austin) Bertolino, Derek (Erin) and Kristen Vogel. She delighted in her great grandchildren Brady Vogel and Haley Nichols, Andy, Emily Lucille, and Derrick Gravelle, Ashlynn and Reagan Vogel, Rowan and Lennon Vogel, Gretchen, Gentry Jo, Kreed, and Kru Bertolino, and Emma Vogel She enjoyed farming with her husband. After raising her family she worked as a Certified Nurse's Assistant and home health worker for over 20 years. Her hobby was crocheting afghans. She loved a laugh or sharing produce from her garden and baking from her kitchen. Pie was her favorite dessert. She loved to read, kept up with politics, and took pride in writing "Lines from Lucille" printed in the Cissna Park News. "Lines from Lucille" high-Iighted life in a rural community, her travels across the U.S. to visit her children and her adventures. Lucille was a member of Trinity Lutheran Church. Due to the national health emergency, there will not be a funeral. As an alternative, family and friends are encouraged to visit Lucille's gravesite in St. Peter's Cemetery, Route 49, Crescent City and say a prayer or share a story. A celebration of Lucille's life will be held at a later date. A private graveside service for the family was held on March 28. In memory of her, the family asks you to reach out to others as she has done for decades. Send a birthday card to a family member, drop off a slice of pie to another, donate to the food pantry, check on your neighbors, telephone a friend. Memorials can be made to the Cissna Park Fire Protection District, the Cissna Park Community Library, the Cissna Park American Legion, Trinity Lutheran Church, or the Iroquois County Historical Society Old Courthouse Museum. Arrangements are by the Knapp Funeral Home in Cissna Park. Please share a memory of Lucille at www.knappfuneralhomes.com

Lucille Margaret Hustedt Vogel, 93, of Cissna Park, IL passed away on Wednesday, March 25, 2020 at her home. She was born in 1926 on May 14, her father's birthday. Lucille, the daughter of John C. and Meta Willms Hustedt, was born at their... View Obituary & Service Information

The family of Lucille Hustedt Vogel created this Life Tributes page to make it easy to share your memories.

Send flowers to the Vogel family.