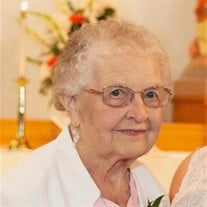 Lorraine J. Meents, 88, of Ashkum passed away on Friday, February 4, 2022, at Riverside Medical Center in Kankakee. She was born on March 5, 1933, at the family home in Crescent Township Section 27 in Iroquois County, the daughter of John and Sophie Marie Aline (Boyer) Wessels. She married Vernon J. Meents on April 10, 1954, at St. Peter’s Lutheran Church in Crescent City. Lorraine is survived by two sons, Jon (Diane) Meents of Ashkum and Rob Meents of Ashkum; two daughters, Jody (Larry) Munsterman of Onarga and Lori (Chuck) Cunningham of Ashkum; eight grandchildren, Jon (Jen) Meents Jr., Christopher (Michelle) Cunningham, Bryan (Kelly) Meents, Kelly (Steven) Cometa, Ryan (Kelsey) Munsterman, Ross (Lindsey) Munsterman, Lauren (Zach) Gerdes and Kyla Cunningham; her great-grandchildren, Cameron, Brayden, Olivia, Easton and Addie Meents; Carson and Carter Cunningham; Alayna, Hayley and Cayden Meents; Cooper Cometa; Matthew and Noah Munsterman; Rowen and Baby Boy Munsterman due in April; and Braeton Gerdes; one niece and several nephews. Lorraine was preceded in death by her husband on July 8, 2016; her parents, and her brother, Lowell Wessels; and her sister, Marian Wall. She was a member of the Zion Lutheran Church in Ashkum where she served as a member of the Altar Guild. Lorraine worked for the United States Postal Service in Ashkum from 1967 to 1993. On May 1, 2018, Lorraine was honored by the National Rural Letter Carriers Association to certify that she had completed 50 years or more as a member of the National Rural Letter Carriers Association. She passed away on National Thank a Mail Carrier Day. She attended Prairie Green School District 133, a mile and a half east of the family farm for grades 1-7. By the 1940s, a school consolidation movement began and Prairie Green school ceased to exist. Her father, John Wessels, was on the Prairie Green Board of Education. She attended Woodland Grade School for 8th grade. Lorraine attended Crescent-Iroquois High School with the Class of 1951, the last class to graduate from the “old high school”. The current Crescent-Iroquois High School building, located on the east side of Crescent City, was a work in progress while she was in high school. She worked at the Farm Bureau office in Watseka following high school. Funeral services will be at 11:00 am. on Saturday, February 12, 2022, at the Zion Lutheran Church in Ashkum with Rev. Don Gillespie officiating. Visitation will be held two hours prior beginning at 9:00 a.m. Burial will follow in the Danforth Cemetery. Memorials may be given to Zion Lutheran Church in Ashkum, Prairieview Lutheran Home in Danforth, or St. Jude Children’s Hospital. Arrangements by the Knapp Funeral Home in Clifton. Please share a memory of Lorraine at www.knappfuneralhomes.com.

Lorraine J. Meents, 88, of Ashkum passed away on Friday, February 4, 2022, at Riverside Medical Center in Kankakee. She was born on March 5, 1933, at the family home in Crescent Township Section 27 in Iroquois County, the daughter of John and... View Obituary & Service Information

The family of Lorraine J. Meents created this Life Tributes page to make it easy to share your memories.

Lorraine J. Meents, 88, of Ashkum passed away on Friday, February...

Send flowers to the Meents family.