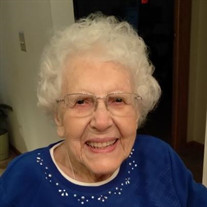 Leah Spenn, 102, of Watseka, went to be with her Heavenly Father on Monday, April 5, 2021. She was born in Glenford, Ohio, on June 16, 1918, to Rev. J. P. and Mary (Bucher) Mosher. She was baptized by her father at St. Paul Lutheran Church in Glenford, Ohio, on July 14, 1918, and confirmed at Salem Lutheran Church in Wooster, Ohio, on March 29, 1931. On June 8, 1943, she married Rev. Robert Spenn. They were happily married for nearly forty years until his untimely death on February 17, 1983. Leah’s sons and daughters-in-law are Fred and Cheryl Spenn of Winter Haven, Florida, Ted and Carmie Spenn of Watseka and Rich and Teresa Spenn of Williamsville, Illinois. Her grandchildren (and spouses) are Dan (Mary) Spenn, David Spenn, Jacob (Bethany) Spenn, Jonathan (Amy) Spenn, Rachel Spenn and Kathryn (Alex) Boeckman. Her great grandchildren are Kevin Spenn, Madison Spenn, Mason Spenn, Rylin Spenn, Carson Spenn, Noah Spenn, Selah Spenn and Wyatt Spenn. She was preceded in death by her parents, her sister, Ruth Metz, and by four half-brothers and one half-sister. Leah graduated in 1939 from Capital University, in Columbus, Ohio. Before her marriage she taught in high schools in Ohio. In the late 1950’s and early 1960’s she taught at Watseka Community High School. She enjoyed helping her husband in his pastorates in Ida and Summerfield, Michigan, and in Crescent City, Flanagan and Emden, Illinois. She has been a member of Faith Lutheran Church since moving to Watseka in 1983. Her funeral service will be held at Faith Lutheran Church in Watseka on Saturday, April 10, 2021, at 11:00 A.M. Rev. Alex McNally will officiate. A visitation will be held at the church beginning at 9:00 A.M. on that day and ending just prior to the service. Memorials may be made to Faith Lutheran Church, 425 East Lincoln Avenue, Watseka, Illinois 60970. Arrangements by Knapp Funeral Home in Watseka.

The family of Leah Spenn created this Life Tributes page to make it easy to share your memories.

Leah Spenn, 102, of Watseka, went to be with her Heavenly Father...

Send flowers to the Spenn family.