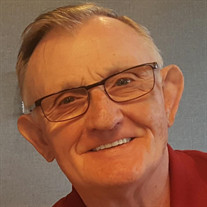 Keith L. Tatro, 83, of Danvers, IL passed away on Saturday, September 25, 2021 at his residence. Keith was born May 13, 1938, the son of Leroy and Nedra (Turner) Tatro. He married Joyce Peterson in Lerable on March 2, 1957 and she preceded him in passing August 27, 1994. He later married Linda Watts on May 10, 2004 in Wichita, KS. Surviving is his wife, Linda Tatro of Danvers; three daughters, Tracy (Kent) Saxsma of Ashkum, Kelly (Larry) Bauer of Clifton, and Jenny (Eric) Post of Danvers; 8 grandchildren, Jessica Meents, Lyndsi (Ryan) Kime, Heidee Gocken, Jordan Lehmkuhl, Christopher Bauer, Morgan Johnson, Katie (Matt) Wiemer, Wes (Crystal) Post, twenty great grandchildren; one brother, Duane (Betty) Tatro; and many nieces and nephews. He was preceded in death by his parents; first wife, Joyce; one grandson, Cody Lehmkuhl; one sister, Barbara Mahoney. He was a member of Plumbers and Pipe Fitters Local, Chebanse American Legion, and Chebanse Lions Club. Keith was a girl’s softball coach for eighteen years. He served many years on the Otto Twp. Fire Dept and was former Mayor of Chebanse and he loved fishing and hunting. Keith just celebrated 48 years of sobriety. Visitation will be from 4:00 – 6:00 p.m. on Wednesday, September 29, 2021 at Knapp Funeral Home in Clifton. Funeral services will follow at 6:00 p.m. at the funeral home. Committal services at Evergreen Cemetery will be at a later date. Memorials may be made to family’s wishes.

The family of Keith L. Tatro created this Life Tributes page to make it easy to share your memories.

Send flowers to the Tatro family.