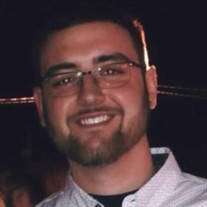 Kameron Reed Wilken, 23, of Danforth, IL, gained his Angel wings on Sunday, January 16, 2022. Kameron was born on March 27, 1998 to Reed and Shelly Wilken in Kankakee, IL. After Kameron graduated from Iroquois West in 2016, he pursued his lifelong dream of driving a truck over the road. He was born into the life of trucking coming into this world at 10lbs 4oz on the Mid-America Trucking Show weekend. Kameron was an honest, loyal man and a friend known across the country to give the shirt off his back. He was the brightest light that will continue to shine on everyone he knew and loved. Kameron began his career with Farm Dawg Trucking, Inc. in 2016. He started K. Wilken Trucking, Inc. where he owned and operated his truck. In December 2021, Kameron was granted his own authority. He enjoyed being on the road, making friends at truck shows, Harleys, shooting pool, golfing, and snowmobiling. He had a natural talent for anything he tried his hand at. Kameron is preceded in death by his Grandma Carlene Wilken and Great Grandma Mason Buchanan. He is survived by his parents Shelly Wilken and Reed (Kim) Wilken, his sisters Keagon (John) Urban, Karlyn (Gavin) Warmbold, and Kaleigh (Anthony) Valandingham, his grandparents Donald and Jo Wilken, Ron and Ruby Knight, and his girlfriend Allison Cornwell. He was the proud uncle to Ainsley, Chase, and Andrew Urban, Walker Warmbold, and Konnar, Blake, and Rylie Valandingham. Visitation will be held at Iroquois West High School on Saturday, January 22, 2022 from 9:00 a.m. to 2:00 p.m. Funeral service will follow at 2:30 p.m. with Pastor Brian King officiating. Burial immediately following in the Danforth Cemetery in Danforth. In lieu of flowers, the family requests donations be made to the Kameron Wilken Memorial Fund. Arrangements made by the Knapp-Redenius Funeral Home in Gilman. Please share a memory of Kameron at www.knappfuneralhomes.com.

Kameron Reed Wilken, 23, of Danforth, IL, gained his Angel wings on Sunday, January 16, 2022. Kameron was born on March 27, 1998 to Reed and Shelly Wilken in Kankakee, IL. After Kameron graduated from Iroquois West in 2016, he pursued his lifelong... View Obituary & Service Information

The family of Kameron Reed Wilken created this Life Tributes page to make it easy to share your memories.

Send flowers to the Wilken family.