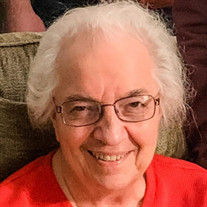 Joyce Bauer Stock, 81, went to be with Jesus on April 18, 2022, after a short illness, at Carle Hospital in Urbana surrounded by her loving family. Joyce was born on December 27, 1940 in Cissna Park to Paul and Esther (Koehl) Hodel. She married Jon Bauer on August 12, 1962, and he preceded her in death on November 25, 1967. She later married Les Stock on November 16, 2008, and he survives in Cissna Park. Joyce is also survived by one daughter, Julie (Doug) Walder of Hoopeston, 3 grandchildren, Katie Walder, Ryan (Tamar) Walder, Ashley Walder, and 3 great grandchildren, Ben, Ty, and Ezra; sisters Carol Crist, Sacramento, CA, Lois Neihouser, Francesville, IN, Gloria Leman, Washington, IL, and many nieces and nephews. She is also survived by 7 step children, Gloria (Wayne) Laubscher, Mackinaw, IL, Steve Stock, Towanda, IL, Stan (BJ) Stock, Covington, IN, Pat (Morris) Young, DeKalb, IL, Ed (Dawn) Stock, Cissna Park, IL, Tom (Karol) Stock, Cissna Park, IL, and Donna Mitchell, Champaign, IL, 20 step grandchildren and 30 step great grandchildren. In addition to her first husband, she was preceded in death by her parents, her sister, Mary Jane Mueller, a foster sister, Mildred Vogel, 4 brothers in law, George Mueller, Les Crist, Andre Neihouser, and Doug Leman, a foster brother in law, Bud Vogel, a step son in law, Kurt Mitchell, and a step daughter in law, Lori Stock. Joyce had a passion for teaching and spent over 20 years as the Home Ec teacher at Cissna Park High School. She was a Sunday School and VBS teacher at her church for many years, and also taught countless sewing classes at The Sewing Boutique in Hoopeston, where she was part owner. Joyce was a member of the Apostolic Christian Church of Cissna Park. In her spare time, she enjoyed sewing, reading, and spending time with her family. A visitation will be held on Friday, April 22, from 3-7 pm at the Knapp Funeral Home in Cissna Park and one hour prior on Saturday at the church. The funeral service will be held at 10:00 am Saturday, April 23, at the Apostolic Christian Church in Cissna Park, with church ministers officiating. Burial will follow at the church cemetery. Memorials may be made to the Apostolic Christian Church of Cissna Park or Our Daily Bread Ministries.

Joyce Bauer Stock, 81, went to be with Jesus on April 18, 2022, after a short illness, at Carle Hospital in Urbana surrounded by her loving family. Joyce was born on December 27, 1940 in Cissna Park to Paul and Esther (Koehl) Hodel. She married... View Obituary & Service Information

The family of Joyce Bauer Stock created this Life Tributes page to make it easy to share your memories.

Send flowers to the Stock family.