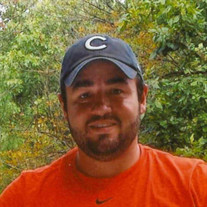 Josh “Buzz” Herscher, 39, of Onarga passed away on Tuesday, April 6, 2021 at his home. He was born on May 21, 1981 in Kankakee, the son of Dennis Herscher and Diane Harrison. Josh married Shelly Kuehling in Gilman on October 23, 2004 and she survives. He is also survived by one son, Wyatt Herscher of Onarga; one daughter, Jovie Herscher of Onarga; father, Dennis (Debbie) Herscher of Gilman; mother, Diane Herscher of Florida; mother-in-law, Cheryl Kuehling of Bloomington; father-in-law, Paul Kuehling of LeRoy; one brother, Joel (Melissa) Herscher of Naperville; two sisters, Kara (Dave) Piper of Peotone and Nina (Clay) Lindhorst of Waterloo; materal grandmother, Roberta “Barney” Harrison of Gilman; and several nieces and nephews. Mr. Herscher was a member of Immaculate Conception Catholic Church in Gilman and owner/operator of K&H Truck Plaza. He loved camping at the timber, mudding on the ATV, attending Cubs games, and being with his family. Josh was always there for someone in need or to lend a hand to help a friend. He was compassionate, generous, and patient. Memorial mass will be held on Saturday, April 17, 2021 at 11:00 a.m. at Immaculate Conception Catholic Church in Gliman. Fr. Marek Herbut will officiate. Burial will be held at a later date. Memorial visitation will be held on Friday, April 16, 2021 from 3:00 p.m. to 8:00 p.m. at Knapp-Redenius Funeral Home in Gilman. In lieu of flowers, memorials may be made to his children’s education fund through Federated Bank in Onarga.

The family of Josh "Buzz" Herscher created this Life Tributes page to make it easy to share your memories.

Josh “Buzz” Herscher, 39, of Onarga passed away on Tuesday, April...

Send flowers to the Herscher family.