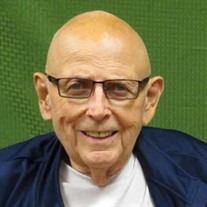 John Wilkening's Memorial Service & Celebration of Life: Saturday, June 12, 2021 Memorial Service: 11:00 a.m. Funeral Service at St. Paul's Lutheran Church in Woodworth, IL; followed by military funeral presentation at the gravesite by Cissna Park American Legion at St. Paul's Church Cemetery. Celebration of Life: Catered lunch to follow at the Wilkening Farm Shed, 354N 1300 East, Cissna Park, IL 60924 (following the services at approximately 12:30 p.m - from south edge of Cissna Park, go east to RD 1300, then south 1.5 miles). There will be plenty of room to social distance and share memories of John's life. Please text, call, or email to RSVP for lunch to Mark (cell # 815-383-2097 or Cathy (cell # 217-714-6545) or email at [email protected] John Arthur Wilkening, affectionately known as “Big John”, passed away on April 6, 2021 at the age of 79, at Country Health in Gifford, IL surrounded by family. His battle with serious medical issues in recent years showed his courage in facing life challenges with a smile and his trust in God. Despite the pain, John came out a hero and stayed strong until the end. John was born on January 7, 1942 to Lydia (Hoppe) and Elmer Wilkening of Cissna Park, IL. He and his younger brother, Stuart, were raised on the family farm. John attended St. Paul Lutheran School K-8th and graduated from Cissna Park High School in 1960. Following high school, John proudly served in the Army National Guard for six years as a tank mechanic/driver. In addition to working on the family farm, he worked at the Cissna Park Co-op making concrete blocks and driving a ready mix truck, hauled cattle for the Wyss Brothers and Cissna Park sale barn, raised cattle and farmed with his cousin, Mark Wilkening. John was a third generation farmer on a Centennial farm that his grandfather bought in 1886. This farm was in the Wilkening family for over 100 years. Destined to be a confirmed bachelor, John met his beloved wife, Elizabeth “Betty” Carlton, who he called his one true love, and they were married on November 7, 1987. Betty was a widow who brought four children to this marriage. Cathy (Dan) Luhrsen, Pesotum, IL, Gary (Tammy) Carlton, Somerville, TN, Brian (Michaela) Carlton, Clarksville, TN, and David (Julie) Carlton, Riverview, FL. John often referred to them as a package deal and was a great dad. Additionally, he was a papa to Amy (Tim) McNabb, Stacey (Mike) Austin, Joshua Luhrsen, Matthew (Angela) Luhrsen, Gabriel Luhrsen, Christopher (Janae) Carlton, Brianna Carlton, and Logan Carlton and his fiancé, Cayce Ferguson. Great grandchildren include Jonathan, Elliott, Allison, Kaci, Jacob, Megan, Talynn, Owen, Amelia and Amora. Also surviving John are his brother Stuart and wife Mary Wilkening of Litchfield Park, AZ. He was very close to them and their three children who he was a proud uncle to: Jon (Anna) Wilkening and family, Katie (Mike Pabst) and family, and Tom (Alex) Wilkening and family, John’s very special cousin Mark (Dinah) Wilkening and family and many cousins near and far. He was preceded in death by his parents, Elmer and Lydia Wilkening and infant great grandson, Caden Luhrsen. During his lifetime, John served his community on the Farm Bureau Board from 1987-2011, served on the Iroquois County Board from 1994-2012, and served on the 911 Board for 10 years, as well as being a vice-chairman and chairperson of the highway committee. Additionally, he served on the Claytonville Grain and Goodwine Elevator Coop for approximately 20 years. John’s faith in God was strong and his commitment to his church was demonstrated in his service as an usher, elder, chairperson and financial secretary at St. Paul’s in Woodworth, IL. John was a proud and active member of the Cissna Park American Legion and held the positions of membership chairperson for 33 years; 18th District Commander in 2007; Cissna Park post commander in 1977; funeral chaplain for over 30 years for over 150 veterans in 32 cemeteries throughout Illinois. He also participated in updating a Veteran’s Assistance program for Iroquois county. As John leaves this earthly life he can be proud of a life well lived and well loved. Memorial Service will be held on Saturday, June 12, 2021 at 11:00am, at St. Paul's Lutheran Church at Woodworth. Burial will follow at St. Paul's Lutheran Cemetery, with Military Rites from the Cissna Park American Legion Post #527. Following the services, a Celebration of Life, with a catered lunch, will be held at the Wilkening Farm Shed, 354 N. 1300 E., Cissna Park, (from south edge of Cissna, go east to RD 1300, then south 1.5 miles). There will be plenty of room to social distance and share memories of John's life. Please text, call, or email to RSVP for lunch: Mark - (815)383-2097 Cathy - (217)714-6545 or email: [email protected] John would be honored if memorial donations in his name would be made to the Cissna Park American Legion Post #527, or St. Paul’s Lutheran Church in Woodworth, IL.

The family of John Arthur Wilkening created this Life Tributes page to make it easy to share your memories.

Send flowers to the Wilkening family.