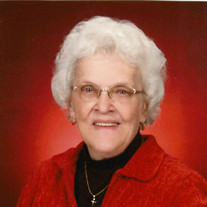 Joann C. Yergler, 86, of Cissna Park passed away on Sunday, March 28, 2021 at Carle Foundation Hospital in Urbana. She was born October 17, 1934 in Artesia Twp., the daughter of Albert W. and Carolina L. (Krumwiede) Seggebruch and they preceded... View Obituary & Service Information

The family of Joann C. Yergler created this Life Tributes page to make it easy to share your memories.

Send flowers to the Yergler family.