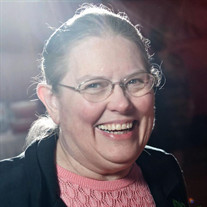 Joan Diane (Mogler) Rudin passed away Friday, Nov 13 at Carle Hospital in Urbana, Il. Drive through visitation will be held on Monday, November 16 from 3:00 pm to 5:30 pm at the Apostolic Christian Church, Cissna Park.  Private services will be held Tuesday with burial following at the Apostolic Christian Cemetery in Cissna Park.   Ervin and Elma (Zaugg) Mogler, welcomed Joan into the world on August 21, 1949 at West Bend, Iowa. The moment you met Joan, you knew she was concerned about you and her friendly manners and captivating smile let you know she was one of those people who could strike up a conversation with anyone familiar or a stranger. With every conversation you got to know Joan a little better, but more importantly she got to know you. She was a woman who valued her friendships and relationships and drew people into her circle of care and concern.   At a young age, Joan had a heart for people in need and during junior high, she spent a summer in Mexico helping teach young people English.  At the age of 15, she gave her heart to her LORD and Savior and was baptized on August 8, 1965.  One of her favorite scriptures was Luke 14:11: “For whosoever exalteth himself shall be abased; and he that humbleth himself shall be exalted.” After graduating from West Bend High School in 1967, she began a career in nursing at the University of Iowa, where she earned a Bachelor of Science Degree in Nursing in 1971.  After working at the Veterans’s Administration Hospital in Iowa City, she went to Nurse Practitioner school in Prescott, Arizona.    On June 19, 1977, Joan was led by the LORD to join Gerald Rudin in marriage at West Bend, Iowa. Their children include: Gail (Vince) Lober of Cissna Park, Julie (Mark) Sidarous, of Chicago, Sarah (Josh) Peoples, St. Joseph, Dan Rudin, Philadelphia,PA, and Jodi (Justin) Sinn, Cissna Park. The family lived in Kankakee, Illinois until they moved to Cissna Park in 1995. Joan loved the village and used her nursing experiences to help many people with their medical challenges. She was well known in the community for her willingness to share her nursing knowledge, her talents, and her love of the LORD as she helped many patients work through their health issues.    She was a devoted wife to Gerald, helping him with his medical needs. She was also a faithful mother and grandmother. She loved her children and 14 grandchildren very much. The grandchildren include: Adrianna and Conner Lober, Carson, Kenton, Jamie, Ruth, Karla, Derric and Damon Sinn, Kaleb and Karter Peoples and Amira, Abigail, and Annabelle Sidarous).  She was preceded in death by her parents, Ervin and Elma Mogler, and one brother, Curtis Mogler.  She is survived by her husband, children, grandchildren and siblings: Beverly Knapp of Cissna Park, IL, Mary (Manuel) Gerber of West Bend, IA, Harriet (Bruce) Metzger of Alvord, IA and Chuck (Beth) Mogler, West Bend, IA and a number of nieces and nephews.    In addition to her work in the community of Cissna Park as a private duty nurse, Joan worked at Shapiro Developmental Center in Kankakee and was well known as a volunteer parent at the Montessori Lincoln Cultural Center in Kankakee.  Joan was a member of the Cissna Park Apostolic Christian Church.  Hers was a life well lived and although it seemed to be cut too short, she certainly leaves an example of Godly love and charity for us to share with the rest of the world. She will be missed very much. Memorials may be made to Fairview Haven Nursing Home in Fairbury or to the donor’s choice. Arrangements by Knapp Funeral Home in Cissna Park. Joan Rudin's funeral service will be livestreamed on Tuesday, November 17th at 10AM CST. You can view the live video at https://youtu.be/j_e5xwb5fP0 The sermon audio will also be broadcast via the AC Central mobile app. The app can be downloaded for Android devices on Google Play, and for iOS devices at the Apple App Store

The family of Joan Diane Rudin created this Life Tributes page to make it easy to share your memories.

Send flowers to the Rudin family.