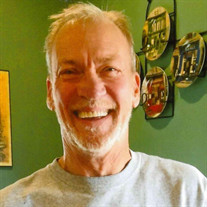 James “Jim” LeRoy Wright, 63, of Martinton passed away at his home on April 1, 2022. Jim was born on March 11, 1959 in Billings, Montana, the son of Chuck Wright and Gwendolyn Schleif of Danforth. Jim spent his life sharing the gift of creativity. He could take an idea in his head and make it a reality. He reveled in the challenge of taking the old and worn and making it new again. Through that gift, many of his customers became close friends. He was a hunter, a fisherman, and most importantly a husband, father and grandfather. Jim married Karen Boehrnsen on December 3, 1977 in Donovan. He’s survived by his wife Karen; two daughters, Brooke (Andrew) Gleixner of Channahan and Lindsey (Brad) Schultz of Virginia; one son, James (Melissa Splant) Wright of Elwood; seven grandchildren, Carrie Wright, Everett Gleixner, Ashlynn Gleixner, Charlotte Splant, Finley Wright, Elizabeth Schultz, and Noah (Sarah Deffenbaugh) Splant; his mother, Gwendolyn Wright; three sisters and one brother, Patricia (Jim) Roberts, Tina (Glenn Morin) Lord, Tani (James Payne) Parrish, and Charles (Deanna) Wright; and many nieces and nephews. He was preceded in death by his father and one sister, Deb Williams. A memorial visitation will be from 4:00 – 7:00 p.m. on Monday, April 4, 2022 at Knapp Funeral Home in Watseka. Memorials may be made to Uplifted Care in Bourbonnais.

The family of James "Jim" Wright created this Life Tributes page to make it easy to share your memories.

James “Jim” LeRoy Wright, 63, of Martinton passed away at his...

Send flowers to the Wright family.