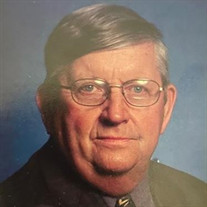 James G. Hack, 80 of Champaign and formerly of Ashkum passed away on Monday December 21, 2020 at Carle Foundation Hospital in Urbana. He was born on August 31, 1940 in Pontiac, IL a son of LeRoy and Emily Ommen Hack. Jim married Barbara A. Sterrenberg in Cullom on January 28, 1961 and she survives. Also surviving are two sons- Kevin (Tara) Hack of Ashkum and Gordon (Lisa) Hack of Chatham, IL; one daughter- Pamela (Jeff) Scott of Mahomet, IL; six grandchildren- Bryan (Regan) Hack, Andrew Hack, Jeremy (Frances) Hack, Nathan (Valerie) Hack, Evan Scott, and Ella Scott; two great grandchildren- Auburn and Blakely Hack; and one brother- Alan Hack of Cullom. He was preceded in death by his parents and one brother- Ronald Hack. Jim was a member of Good Shepherd Lutheran Church in Champaign and former member of Zion Lutheran Church in Ashkum. He was a charter member of the Ashkum Lions Club. Jim was in sales and grain elevator construction for many years. He started out with Ford-Widholm and later worked for Tiffany Industries in St. Louis as Vice President of Overseas Operations building grain elevators in Venezuela and the Dominican Republic. He also worked for Big Wheels Fertilizer Applicator in Paxton as a salesman and Chief Operating Officer of the company. He most recently became self employed owning Jim Hack and Associates retiring in 2006. For the past 16 years, Jim took pride in making several trips to El Salvador with Habitat for Humanity International and Thrivent. Jim was recognized with a Habitat for Humanity Award for Solidarity for his work in El Salvador. He was also a recipient of the Champaign News Gazette 70 over 70 award this year. Private funeral services will be held at the Knapp Funeral Home in Clifton with Pastors Scott and Melissa Keeble officiating. Burial will be in the Westlawn Cemetery in Cullom. Memorials may be made to Good Shepard Lutheran Church in Champaign, Cristo Rey Lutheran Church in El Salvador, or Cristo Rey of Hope for children in El Salvador.

James G. Hack, 80 of Champaign and formerly of Ashkum passed away on Monday December 21, 2020 at Carle Foundation Hospital in Urbana. He was born on August 31, 1940 in Pontiac, IL a son of LeRoy and Emily Ommen Hack. Jim married Barbara A.... View Obituary & Service Information

The family of James G. Hack created this Life Tributes page to make it easy to share your memories.

James G. Hack, 80 of Champaign and formerly of Ashkum passed...

Send flowers to the Hack family.