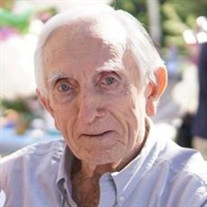 Ivan Elmer Petersen, 96, passed away peacefully on January 5, 2021, in Pacific Palisades, California. He was born on November 7, 1924, in Rankin, IL, the son of Elmer and Lena Lemenager Petersen. Ivan married Lorena Mayes in Ashkum on January 5, 1946, and she preceded him in death on February 1, 2002. Ivan was a member of Assumption BVM Catholic Church in Ashkum and a past member of the Lions Club and AOPA. He farmed in the Ashkum area from childhood until 1970. He was past President of Ashkum Farmers Grain Company. Ivan owned and operated Petersen Insurance and Real Estate for many years. He was Director and President of the Watseka Mutual Insurance Company. He retired as Director of the 1st National Bank of Clifton in 2005. Ivan’s proudest accomplishment was building an experimental personal aircraft with his son, Alan, from 1985 to 1990. The plane provided many memories for Ivan’s family and friends over many years until it was relocated to Utah to be enjoyed by Alan and his family. Ivan loved golfing and dining and playing cards with his dear friends, both in the Ashkum area and during the winters spent in Florida. He was proud of his children and grandchildren and spent his last two years in California delighted by his great-grandchildren. Survivors include one daughter, Marla (Brad) Seto of Pacific Palisades, CA.; one daughter-in-law, Wendy (Alan, deceased) Petersen of Park City, UT; five grandchildren, Jordan Petersen, Graham Petersen, Brandon (Jeri) Seto, Emily Seto (Federico) Bianchi, and Kevin (Audrey) Seto; and seven great grandchildren. He was preceded in death by his parents; five brothers, Harold, Vernon, Wendell, Delmer and Art Petersen; three sons, Richard, Mark, and Alan Petersen; and one daughter, Linda Petersen. In consideration that Ivan died of Covid-19, and out of concern and care for family and friends, there will be no formal funeral services. Burial will be in the Ashkum Cemetery. Please raise a glass of Jack in memory of Ivan’s contributions to family, friends and community. Memorials may be made to the donor’s choice or to UCLA Dementia Care, uclahealth.org/dementia. Ivan was proud of his 13 year participation in a long-term research study there. Please share a memory of Ivan at www.knappfuneralhomes.com

Ivan Elmer Petersen, 96, passed away peacefully on January 5, 2021, in Pacific Palisades, California. He was born on November 7, 1924, in Rankin, IL, the son of Elmer and Lena Lemenager Petersen. Ivan married Lorena Mayes in Ashkum on January... View Obituary & Service Information

The family of Ivan Elmer Petersen created this Life Tributes page to make it easy to share your memories.

Send flowers to the Petersen family.