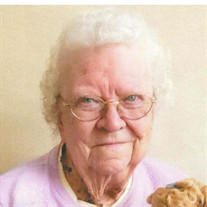 Ivadelle Agnes Meints, 91, of Danforth died Thursday, March 12, 2020, at Prairieview Lutheran Home, Danforth, IL. Ivadelle was born October 16, 1928, the daughter of Raymond and Lydia (Fatka) Geisler, Danforth, IL. When Ivadelle was a young girl, her mother passed away, and her father later married Carrie Stoup in 1944. Ivadelle was baptized and confirmed at St. John’s Lutheran Church in Danforth, IL. She graduated from Cullom Community High School in 1946. After her training at beauty school, she became a hairdresser. She operated a beauty shop at Cullom and later one in her Danforth home. She married George F. Meints, Jr. on August 26, 1951 at St. Paul Lutheran Church, Gilman, IL. Their attendants were her best friend, Leona (Kewley) Meredith, and George’s brother, Ervin Meints. They settled on the Meints family farm and as a farmer’s wife, she helped George with many things. They moved into Danforth in 1968. George predeceased her in 2008. She was active in the Danforth American Legion Auxiliary, St. Paul Lutheran Church activities, and was an election judge for many years. Ivadelle is survived by her niece, Diane (Roger) Gustafson, Paxton, IL; two nephews, James (Patricia) Green, Watseka, IL and Michael Green; and two brothers, Herbert (Ann) Weber of Georgia and Ed (Sandy) Weber of Florida. She is also survived by her Aunt, Mildred Schunke, Gilman, IL; numerous cousins and friends; and her Prairieview buddy, Dolores Wingren. She enjoyed playing cards and bingo and doing crafts. Visitation will be Tuesday, March 17, 2020, beginning at 9:00 am with the service at 11:00 am at St. Paul Lutheran Church, Gilman, IL with Pastor Pete Hinrich officiating. Burial will be at Danforth Cemetery. Memorials may be given to St. Paul Lutheran Church or to Prairieview Lutheran Home. Arrangements are by the Knapp-Redenius Funeral Home in Gilman. Please share a memory of Ivadelle at knappfuneralhomes.com.

The family of Ivadelle Agnes Meints created this Life Tributes page to make it easy to share your memories.

Send flowers to the Meints family.