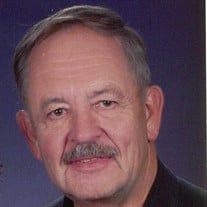 Harry C. Kaper, 88, of Watseka passed away on Thursday, July 22, 2021 at the Iroquois Resident Home in Watseka. He was born on October 29, 1932 in Chicago a son of Neil and Johanna Kingma Kaper. Harry married Grace M. Reed in Chicago on August 21, 1955 and she preceded him in death on January 1, 2021. Also preceding him in death were his parents, two brothers, and one sister. Survivors include three sons- Gary (Debbie) Kaper of Watseka, Burt (Nancy) Kaper of Watseka, and Jeff (Sarah) Kaper of Champaign; two daughters- Susan (Steve) Johnson of Minneapolis, MN and Stephanie (James) Gray of Tower Lakes; thirteen grandchildren- Cornell, Madelyn, Katelyn, Grant, Allison, Alex, Reed, Emma, Ethan, Anna, Olivia, Ellen, and Oliver; five great grandchildren- William, Jackson, Emersyn, Shannon, and Danielle; two sisters- Betty Fetel of PA and Ruth Elliott of Tuscon, AZ. After graduating from Demotte High School, Harry attended South Bend Business College. He continued his education at Kansas State University and he was in the first class to graduate from the Feed Technology School. He entered the executive training program with Ralston Purina Company and worked with them for four years. Harry then formed a partnership with his cousin and established Bedford Woodworking Company in Burbank. This company was well known for high quality cabinetry and millwork throughout the Chicago area. In 1981, he started his own business, Kaper’s Hardware and Building Materials, in Watseka and ran the business until March 2013. Harry was School Board President of District 135 in Orland Park for fourteen years and most recently was a trustee for the Woodland Fire Department. Throughout the years he was active in church ministries serving on elder boards, building committees, and youth programs. A celebration of life service will be held at Cornerstone Church in Woodland on Saturday, August 7, 2021 at 10:00 am with Pastor Jerry Parker officiating. Memorials may be made to Cornerstone Church.

Harry C. Kaper, 88, of Watseka passed away on Thursday, July 22, 2021 at the Iroquois Resident Home in Watseka. He was born on October 29, 1932 in Chicago a son of Neil and Johanna Kingma Kaper. Harry married Grace M. Reed in Chicago on August... View Obituary & Service Information

The family of Harry C. Kaper created this Life Tributes page to make it easy to share your memories.

Send flowers to the Kaper family.