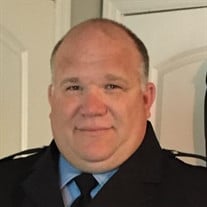 Gregory T. “Kibby” Kibbons, 49, of Ashkum passed away on Monday, November 15, 2021 at Amita Health St. Mary’s Hospital in Kankakee. He was born on October 23, 1972 in Kankakee, the son of Thomas and Elaine (Boness) Kibbons. He married Amy Spitler in Manteno on October 11, 2014. Surviving are his wife, Amy Kibbons of Ashkum; two daughters, Harper Jean and Paisley Anne, both at home; his mother, Elaine (Paul) Munoz of Bradley; two sisters, Amanda (Robert) Forsman of Bradley and Deanna (Kevin) Morrical of Bradley; several nieces, nephews and cousins; mother-in-law, Becky (Dave) Kraft of Clifton; father-in-law, Jeff (Dee) Spitler of Hammond, IN; and sisters-in-law, Rachel Davis of Murfreesboro, TN and Cami Spitler of Hammond, IN. He was preceded in death by his father, Thomas. Greg was a member of Zion Lutheran Church in Chebanse. Greg served on the Otto Twp. Fire Department and as an Otto Twp. EMT for ten years and from 2013-2017, he served on the Ashkum Twp. Fire Department. He was a security guard at Exelon in Braidwood and loved hunting, NASCAR, and was a White Sox, Blackhawks, and Cowboys fan. Greg was known to his nieces and nephews as, “Uncle Bib”. He loved spending time with his girls. Funeral services will be at 12:30 pm on Saturday, November 20, 2021 at Knapp Funeral Home in Clifton. Chad McGinnis will officiate. Burial will follow at Evergreen Cemetery in Chebanse. Visitation will be from 9:30 am-12:30 pm on Saturday, November 20, 2021 at Knapp Funeral Home in Clifton. In lieu of flowers, memorials may be made to the family for his daughters.

The family of Gregory T. Kibbons created this Life Tributes page to make it easy to share your memories.

Send flowers to the Kibbons family.