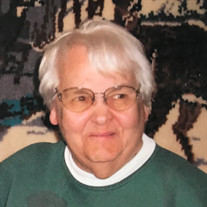 Grace Pool, 83, of Onarga passed away on January 25, 2021 at Carle Foundation Hospital in Urbana. She was born April 13, 1937 in Onarga, the daughter of John and Margaret (Dannehl) Tilstra Sr. She married James “Jim” Pool on June 14, 1957 in Onarga and he preceded her in death on March 27, 2006. She was also preceded in death by her parents; two brothers, Roger Tilstra and John Tilstra Jr.; and two sisters, Margaret Hasselbring and Thelma Tilstra. She is survived by one daughter, Judy Kolitwenzew of Woodland; two sons, Doug (Barb) Pool of Onarga and Guy (Karrie) Pool of Onarga; four grandchildren, Jessica (Matt) Roe of LeRoy, Kayla (Jesus) Garcia of Brownsburg, IN, Kyle (Kelsey Dubree) Pool of Paxton and Marissa Pool of Onarga; two step-grandchildren, David (Holly) Zirkle of Onarga and Beth (Sergio) Gomez of Onarga; six great-grandchildren; one brother, Harold (Julie) Tilstra of Onarga; two sisters-in-law, Mary Tilstra of Onarga and Marilyn Tilstra of Onarga; and several nieces and nephews. Mrs. Pool was a member of the United Methodist Church in Onarga and a graduate of the Onarga High School Class of 1955. Grace managed Tilstra’s Café from 1971-1999 and was known for her famous coffee cakes. She enjoyed cooking, birdwatching, especially owls, and watching the Buckley Dutchmasters. Grace was an avid Cubs and Cowboys fan. Visitation will be from 10:00 a.m. until the 12:00 p.m. graveside service on Saturday, February 6, 2021 at the Del Rey Cemetery. Rev. Neil Larimore will officiate. Burial will follow the service. The family requests casual dress for the service. Memorials may be made to the Buckley Dutchmaster Field Improvement Fund or St. Jude Children’s Research Hospital. Arrangements are by the Knapp Funeral Home in Onarga. Please share a memory of Grace at knappfuneralhomes.com.

The family of Grace Pool created this Life Tributes page to make it easy to share your memories.

Send flowers to the Pool family.