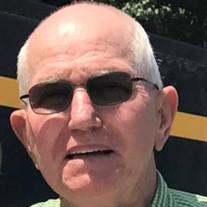 Not sure what to send?

Gordon L. Langellier, 80, of Pensacola, FL and formerly of Watseka, passed away on Monday, May 2, 2022 at his daughter’s residence in Pensacola, FL. He was born on June 25, 1941 in Williams County, OH, the son of Raymond and Wilma (Hicks) Langellier and they preceded him in death along with four brothers; and one sister. He married Nancy Butzow in Watseka on October 7, 1962 and she survives. Besides his wife, Nancy Langellier of Pensacola, FL, he is survived by one daughter, Pam Weidert of Pensacola, FL; one son, Jon (Angie) Langellier of Virden, IL; three brothers; four sisters; and seven grandchildren, Madeline, Zayne, and Evan Langellier of Virden, IL and Lauren, Janna, and Mandi Weidert of Pensacola, FL and Kenna Weidert of Ft. Collins, CO. Gordon was a farmer and auto mechanic. He was a member of First United Methodist Church in Watseka. Gordon enjoyed playing basketball as a child and into young adulthood and later on in life he enjoyed watching his children, Pam and Jon, and his grandchildren play basketball. He always had a love for basketball, especially women’s basketball including the WNBA. A private memorial service will be held in Pensacola, FL. A graveside service will be held at 4:00 p.m. on Sunday, May 29, 2022 at Flesher Cemetery in Crescent City.

The family of Gordon L. Langellier created this Life Tributes page to make it easy to share your memories.

Gordon L. Langellier, 80, of Pensacola, FL and formerly of Watseka,...

Send flowers to the Langellier family.