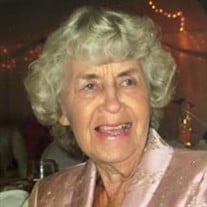 Gladys ("Glady") June (Steffen) Kaufmann entered the loving arms of her Savior, Jesus Christ, on Monday, July 5, 2021, at 3:00 p.m. at Carle BroMenn Medical Center. She was 92. Glady was born in Elgin, Illinois to Theophile and Mabel (Wewetzer) Steffen on June 14, 1929. She married Donald D. Kaufmann of Cissna Park, IL, on Feb. 14, 1954, in Elgin. He survives, along with their five children: Nancy (Russell) Schwartz of Kissimmee, FL; Jim (Nancy) Kaufmann of Normal; Tal (Heidi) Kaufmann of Ballwin, MO; Valerie (Brian) Burcham of Bloomington; and Mark (Jennifer) Kaufmann of Traverse City, MI, along with 15 grandchildren and 5 great-grandchildren. She is also survived by a brother, Dale (Sharon) Steffen of Rancho Santa Fe, CA, and a sister, Jeanne (Richard) Stoller of La Jolla, CA, along with many nieces and nephews. She was preceded in death by four sisters: Louise Steffen, Lenora Steffen, Helen Steffen and Rosemary "Dode" Rechkemmer; and four brothers: Albert Steffen, Earl Steffen, Raymond Steffen and Walter Steffen. She was one of 11 children, and along with her siblings and her many Steffen cousins, she attended Elgin High School. Following graduation, Glady was employed by the Elgin National Watch Company. After marrying, she moved to Cissna Park where she raised her family and worked in the food service department for the Cissna Park School District. In 1992, she and Don moved to Normal. They spent part of each year in Ft. Myers, FL, where they enjoyed many good times with family and friends. Glady was talented artistically and painted many of Don's wood carvings. She greatly enjoyed entertaining and spending time with both friends and family. She was a member of the Apostolic Christian Church of Bloomington. A visitation will be held on Sunday, July 11, 2021, at the Bloomington Apostolic Christian Church from 2:00-5:00 p.m. Funeral services will be held on Monday, July 12, 2021, at 10:00 a.m. at the Bloomington Apostolic Christian Church. Church ministers will officiate. In lieu of flowers, memorial contributions may be made to St. Jude Children's Research Hospital. Arrangements are by the Knapp Funeral Home in Cissna Park. Online condolences may be left at www.knappfuneralhomes.com

The family of Glady Kaufmann created this Life Tributes page to make it easy to share your memories.

Send flowers to the Kaufmann family.