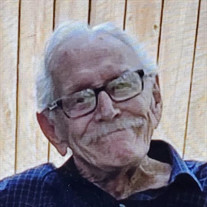 George D. Harvick, 89, of Gilman passed away on Tuesday, December 7, 2021 at his daughter’s home. He was born on November 13, 1932 in Woodriver, Illinois, the son of George A. and Arena (Merrill) Harvick. He married Ruth J. Perkins in 1954. George later married Judith Uebele Bleich in Danforth on June 17, 1978. Surviving are his wife, Judith Harvick of Gilman; seven children, David (Suzy) Harvick of Santa Rosa Beach, Florida, Jim Harvick of Panama City Beach, Florida, Traci (Tom) Houser of Buckley, Jody Harvick of Kentland, Indiana, Terri (Paul) Kingery of Danforth, Juli Bleich Curtis of Gilman and Damon Bleich of Bradley; daughter-in-law, Jean Harvick of Crescent City; fourteen grandchildren; and twenty-one great-grandchildren. George was preceded in death by his parents; one brother; two sisters; and one son, Mark Harvick. Mr. Harvick attended the Danforth Reformed Church. He retired after 32 years from Armstrong World Industries. George enjoyed traveling and boating. He was a talented artist and loved NASCAR. George was a proud veteran of the United States Army and served during the Korean Conflict. He was a member of the Gilman American Legion Post 499. He was a passionate patriot and loved politics. Funeral services will be at 11:00 a.m. on Monday, December 13, 2021 at the Danforth Reformed Church in Danforth with visitation one hour prior to the service. Pastor Don MacDonald III will officiate. Burial will follow in the Danforth Cemetery with graveside military rites by the Gilman American Legion Post 499. The visitation will be held from 2:00 p.m. until 5:00 p.m. on Sunday, December 12, 2021 at the Knapp-Redenius Funeral Home in Gilman. Memorials may be made to the Gilman American Legion Post 499, Danforth Reformed Church, or donor’s choice. Arrangements are by the Knapp-Redenius Funeral Home in Gilman. Please share a memory of George at www.knappfuneralhomes.com.

The family of George D. Harvick created this Life Tributes page to make it easy to share your memories.

George D. Harvick, 89, of Gilman passed away on Tuesday, December...

Send flowers to the Harvick family.