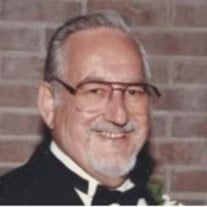 George William Granzow, 84 of Clifton passed away Sunday, March 15, 2020 at Amita Health St. Mary’s Hospital in Kankakee. He was born April 26, 1935 in Oak Park, IL, the son of Harry J. and Grace (Conklin) Granzow Sr. and they preceded him in death. He was also preceded in death by one brother, Harry Jr. He married Ethelyn A. “Boe” Bunnell on December 13, 1958 in Van Nuys, CA, and she survives. He is also survived by three daughters, Mary (Jerry Lachenbruch) Granzow of Halsey, OR, April Granzow of Clifton, and Kristine (Mark) Crabtree of Ashkum; two sons Carl (Debbie) Granzow of Clifton, and Donald (Rebecca) Granzow of Clifton; nine grandchildren, and nineteen great-grandchildren with one on the way. Mr. Granzow served in the US Navy from 1955-1957. He was an independent accountant and a bank director at First National Bank, and he was also a member of the Independent Accountants Association of Illinois, the Central Hospital Board of Directors, and the National Society of Accountants. He enjoyed reading, drone flying, and motorcycling. Cremation rites will be accorded by Knapp Funeral Home in Clifton. A memorial visitation will be from 4-7 p.m. on Friday, March 20, 2020, at Knapp Funeral Home in Clifton with a prayer service following at 7 p.m. Fr. Vern Arseneau will officiate. Memorials may be made for the family’s wishes. Please share a memory of George at www.knappfuneralhomes.com

The family of George William Granzow created this Life Tributes page to make it easy to share your memories.

Send flowers to the Granzow family.