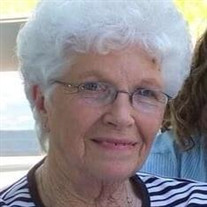 Geniece M. Allen, 92, of Milford passed away on Thursday, February 25, 2021 at her home. She was born on June 19, 1928 in Milford, the daughter of George and Minnie (Brumfield) Mann. She married Denny O. Allen on June 19, 1946 in Milford and he preceded her in death on December 23, 1977. She was also preceded in death by her parents; five brothers; three sisters; and one son, Dennis W. Allen. Geniece is survived by two daughters, Sharon Torbet of Milford and Karen (Glenn) Thrush of Milford; nine grandchildren, Alan Torbet, Monica (Ed) Davenport, Kasey (Jenny) Thrush, Kelsey (Charles) Cox, Golene Thrush, Kyle Thrush, Kylie Thrush, Gosie Thrush, and Gared Thrush; four great-grandchildren; one sister, Sue Kissack of Milford; and one brother, Scott Mann of Hoopeston. Mrs. Allen was a member of the Milford Christian Church and a lifetime Bearcat member. She graduated from Milford High School in 1946. Geniece worked for Howard’s, Tuttle’s IGA in the deli, and at the Watseka Subway for twenty years. Funeral services will be held at 10:30 a.m. on Saturday, March 6, 2021 at the Milford Christian Church. Rev. Brent Zastrow and Rev. Neil Larimore will officiate. Burial will follow at Maple Grove Cemetery in Milford. Visitation will be held on Friday, March 5, 2021 from 4:00 p.m. to 8:00 p.m., also at the church. Arrangements by Knapp Funeral Home in Milford. Memorials may be made to Iroquois Memorial Hospice or the Bearcats Boosters.

The family of Geniece M. Allen created this Life Tributes page to make it easy to share your memories.

Geniece M. Allen, 92, of Milford passed away on Thursday, February...

Send flowers to the Allen family.