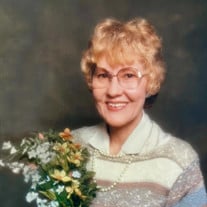 Frances Alene Stolhand, 86, a resident of Buda, Texas, native of Louisiana and longtime resident of Ashkum, Illinois, passed away at Sodalis Memory Care in Buda, Texas on Sunday, November 28th, 2021. Frances, known to her friends as “Fran,” is preceded in death by her sons, Charles “Kip” Stolhand and Britt Stolhand, her parents, George Ervin Estep, Sr. and Hattie Mae Simpson Estep and her brother, George Ervin Estep, Jr. Fran graduated from Louisiana’s Westlake High School in 1953. A chance meeting with former classmate Charles “Chuck” Stolhand at the local library led to a lifelong romance as the two were married March 1st, 1958. Chuck and Fran relocated to Ashkum, Illinois where Fran became the activity therapist at Prairieview Lutheran Home in Danforth. Fran treasured working with the residents at Prairieview for over two decades until her retirement. After retirement, she and Chuck moved to Buda, Texas to be near family. While in Buda, Fran was an avid volunteer at the Wildflower Center, the Buda Library and the First Baptist Church in Buda. Fran is survived by her loving husband of 64 years, Charles; son Jeff and his wife Dee-Dee; two brothers, Don and wife Pat of Monroe, LA and Lynn and wife, Sandra, of Webster, NH; and one sister, Fay Jinks of Monroe, LA. To honor Fran, a private ceremony will be held by the family. In lieu of flowers, please consider donating to Prairieview Lutheran Home (https://prairieviewhome.securepayments.cardpointe.com/pay?paymentType=cc) where a memorial has been created in Fran Stolhand’s name. To donate simply select “In memory of tribute” as the type of donation and enter the name Fran Stolhand in the donation box. Online condolences to the Stolhand family can be made at www.knappfuneralhomes.com.

The family of Frances Alene Stolhand created this Life Tributes page to make it easy to share your memories.

Send flowers to the Stolhand family.