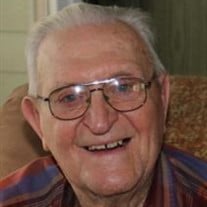 Eugene Gerald Goldsby, 93, of Bloomington and formerly of Gilman passed away on Monday, February 22, 2021 at The Villas of Hollybrook in Bloomington. He was born on September 1, 1927 in rural Thawville, the son of Elza Earl and Emma Edith (Lytle) Goldsby. He married Ruth Anna Kuipers on April 17, 1949 at Danforth Reformed Church in Danforth and she preceded him in passing on May 15, 2012. He was also preceded in death by his parents; son in law, Bill Crippin; four brothers, Merle, Kenneth, Elza Earl Jr., and Charles Goldsby; and four sisters, Bethel Goldsby Wilson Murray, Betty Goldsby Dillow, Ruth Goldsby Sheldon, and Ruby Goldsby Dean. Eugene is survived by three daughters, Jan (Ken) Springhorn of DeSoto, Joyce Crippen of Carbondale, and Gloria (Doug) Jameson of Bloomington; seven grandchildren; eighteen great grandchildren; three great great grandchildren; two sister in laws, Florene Goldsby of San Diego, CA and Mary Ann Goldsby of Gilman; and numerous nieces and nephews. Mr. Goldsby served in the Army Medical Corp during WWII from 1946-1947 and was a motor sergeant of the 22nd Station Hospital in Guam. He was a dedicated father and a loving husband to his wife, Ruth for sixty-three years. He helped take care of her after she was diagnosed with Multiple Sclerosis in 1967. He was a lineman and foreman for Eastern Illinois Power Coop for over thirty years from 1955 until 1987. Mr. Goldsby also worked at Si Workman Filling Station prior to the service, WD Orr International Harvester Dealership from 1948-1955 and worked as an electrician from 1964-1980 at EG Goldsby Electric. Eugene was a lifelong member of Danforth Reformed Church and a volunteer with the Gilman Fire Department. A memorial service will take place at 2:00 pm on Saturday, May 15, 2021 at Danforth Reformed Church in Danforth. Pastor Donald MacDonald will officiate. Burial will follow at Danforth Reformed Cemetery. Visitation will be from 12:30-2:00 pm on Saturday, May 15, 2021 also at church. Cremation rites have been accorded by Knapp-Redenius Funeral Home in Gilman. Memorials may be made to Danforth Reformed Church. Please share a memory of Eugene at knappfuneralhomes.com.

Eugene Gerald Goldsby, 93, of Bloomington and formerly of Gilman passed away on Monday, February 22, 2021 at The Villas of Hollybrook in Bloomington. He was born on September 1, 1927 in rural Thawville, the son of Elza Earl and Emma Edith (Lytle)... View Obituary & Service Information

The family of Eugene G. Goldsby created this Life Tributes page to make it easy to share your memories.

Eugene Gerald Goldsby, 93, of Bloomington and formerly of Gilman...

Send flowers to the Goldsby family.